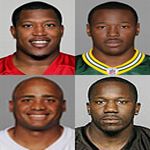 The end of the lockout seems ever so close and the free agent signing period could now be less than a week away by many accounts. The Steelers have some housekeeping of their own to do right of the bat to get under the salary cap and I have posted in depth about that over the last few weeks. The Steelers once again do not look poised to make a huge splash in the free agent market other than possibly attempting to re-sign a few of their own free agents like cornerback Ike Taylor and tackle Willie Colon, but they could indeed be in the market for a third down type back if unrestricted free agent running back Mewelde Moore is allowed to move on. Moore was on the field last season for a little less than 300 plays where he rushed for 99 yards on 33 carries and chipped in another 205 yards on 26 receptions. The Steelers drafted Texas Tech running back Baron Batch in the 7th round of this year’s draft with hopes that he can compete for the 3rd down role. The lockout has certainly hampered the initial development of Batch so they seem poised to bring in an experienced free agent as well.

Saints running back Reggie Bush and the retired Tiki Barber are two names that have been linked to the Steelers all offseason, but I as I have mentioned previously, I do not think either is a fit with the Steelers as both are not regarded as good lockerroom type guys. Also in the case of Bush, his price tag will be much more the salary cap strapped Steelers will want to pay and he also has not been the picture of health since the Saints drafted him. Below I will take a look at the other unrestricted free agent running backs not named Bush or Barber that the Steelers could have their eyes on when free agency starts.

Falcons RB Jason Snelling – Snelling is an easy name to start with as he has shown over the last two seasons that the role of a third down back is not too big for him. In his four years with the Falcons he has rushed for 1,042 yards on 257 carries and caught another 82 balls for 651 yards during that span. His blitz pick-up is more than adequate, especially on third downs. Many speculate that Snelling could be an every down type should the situation arise though and this may lead to more than a handful of teams showing interest in him once free agency begins. It should also be mentioned that the Falcons placed a second-round tender on Snelling prior to the beginning of the lockout just in case he ended up being a restricted free agent per the 2010 terms of free agency. That tender is now pretty much worthless as Snelling will indeed be unrestricted, but the Falcons will certainly not let him get away without a fight. In the end, the price of signing Snelling might just be too high for the Steelers to pay. He would be a nice fit however if the Steelers were able to woo him to Pittsburgh and he also could contribute on special teams in addition.

Packers RB Brandon Jackson – Jackson is another free agent running back that is very easy to link to the Steelers, because of what he has shown on tape with the Packers thus far. Jackson rushed for 703 yards on 190 carries last year in a committee type situation with Green Bay after they lost Ryan Grant for the season in week one due to an injury. He was a great in the passing game as he caught 43 passes for another 342 yards last season and has over 100 receptions total over the last four seasons. His blitz pick-up has also been more than adequate when you go back and look at his tape. Jackson views himself as an every down back, but has not shown to be very consistent as a runner. He is best suited for a third down role in the NFL and that might limit the amount of interest he gets in free agency. The Packers are not likely to put up much of a fight in retaining his services, so the Steelers have as good of shot as any to sign him if the price tag remains reasonable for him, which it should. Jackson is also regarded as a good special teams player and it most certainly would be on his list of things expected from him should he wind up in Pittsburgh.

Dolphins RB Patrick Cobbs – Many may have forgotten that Cobbs was a Steeler for a very brief period time after the Steelers acquired the rights to him from the Patriots for a conditional 2007 draft pick back in early September of 2006. Cobbs was inactive for the Steelers first regular season game that season against the Dolphins and was released the following week. The Steelers wanted to place him on the practice squad after he cleared waivers, but Cobbs refused the offer and instead chose to sign with the Dolphins as a member of their practice squad. It is hard to know if the Steelers have any ill feelings still towards Cobbs for that, but he certainly will come cheap once free agency opens. Cobbs lost most of his 2009 season with the Dolphins after tearing his ACL in week 5 and did not get many opportunities last year with the Dolphins behind starters Ronnie Brown and Ricky Williams. He is adequate in his blitz pick-up and is an accomplished special teams player to boot. He can return kicks as well should the need arise. The Steelers would not have to invest very much to sign him via free agency and that would make him a near risk free signing should he not work out, because of the low price tag he carries.

Eagles RB Jerome Harrison – Harrison was acquired by the Eagles near the middle of last year to serve as the backup to LeSean McCoy. Harrison managed to put up a 6.0 yards per carry on just 40 carries with the Eagles last season and chipped in 8 catches for 43 yards along the way. He saw just fewer than 115 offensive snaps last season in Philadelphia with over half of those coming against the Cowboys in week 17. His best season to date was in 2009 with the Browns where he put up over 1,000 all-purpose yards that included 34 catches. His pass blocking and blitz pick-up is perhaps the worst of the players on this list, but he has worked hard to improve that area of his game. He is not a back that will run away from people, but has shown the ability at times to run both inside and outside. Much like Cobbs, the price tag looks to be low on him and he doesn\’t look to have too many teams chasing him at the start of free agency for his services. The Eagles might indeed be looking to re-sign him after trading foe him last year, but he could draw some mild interest from the Steelers to stay in the state of Pennsylvania. Harrison, like Cobbs, would likely be a very low risk signing and very cutable after camp if the signing bonus is small.

Steelers RB Mewelde Moore – I feel compelled to add Moore on this list as I do not think you can completely rule out the Steelers opting to re-sign him for one more season. Moore very well could get some interest from teams like the Rams, but should he not be signed by the start of camp, the Steelers might like to have the veteran back to compete with Batch and a few undrafted free agents for the role. Moore knows the offense of course and did provide some big first downs last year in key parts of a few games. He can chip in on special teams if needed and he be used as an emergency kick and punt returner. The Steelers will not overpay for him and would likely only want to pay him the veteran minimum for his 7 years accrued in the league.

I will end this post by saying that it is not a slam dunk that the Steelers sign a free agent 3rd down type at all outside of an undrafted free agent or two. Isaac Redman is not a prototypical 3rd down type back, but he did show some promise in his recognition and blitz pick-up last year when called upon. He also showed he can use his hands in the passing game as he caught 9 passes for 72 yards with 2 going for scores. The Steelers very well could give him the opportunity to not only be the back-up to starter Rashard Mendenhall in 2011, but also take over the role that Moore played last year.