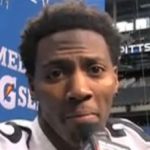 Steelers safety Ryan Clark joined 93.7 The Fan this morning to discuss the comeback of Tiki Barber to the league, the current situation with the lockout and the current war of words between linebacker LaMarr Woodley and Ravens quarterback Joe Flacco.

Clark called Barber a very productive football player and he called it a big surprise that he retired when he did while still on top of his game. Clark said he is not totally sure the reasons behind the return of Barber after four seasons away from the game and does not really know if a guy can take that much time off and return. Clark says maybe Barber will come back and catch lighting in a bottle with fresh legs or maybe it will just be too hard to get the instincts back to come back and play. Clark says if Barber returns to play with another team other than the Steelers, it will not stop Clark from trying to make big hits on him should the Steelers play against him and show him that taking that much time off that things have changed.

Clark says the labor meetings remain very private and the optimism is high about getting a deal done. It is not about posturing, but now about trying to get a deal done so we can have football played on time this year. Clark says he is privy to information of what goes on during these private talks so he can pass the information on to his teammates. Clark says a deal can get done quickly if the NFL emerges this week from their meetings with a deal that is fair.

As far as the Woodley and Flacco war of words, Clark says he heard what Woodley said, but had to be filled in on what Flacco said in reply. Clark laughed and said he does not pay that much attention Flacco or the Baltimore Ravens for it to be his concern. He says Flacco has a tough time against the Steelers and quarterback Ben Roethlisberger and is not saying that because he is cocky, only because the stats show it. He says it has been hard for the Ravens to put up points against them and hard for Flacco to have exceptional games like he does against other teams. Clark says Flacco is not an elite quarterback yet, but he has been good and says the Steelers will never just lie down against the Ravens.

Clark was asked about the Flacco eyebrows causing any problems and Clark called them formerly a unibrow that have now made their way to just a bushy brow and that it may be his trademark. Clark says the eyebrows don\’t make a difference in the game though. Clark says he is not affected by trash talk and he does not talk trash on the field. He says eventually the game still has to be played despite the talk and at his age he needs to save as much breath as he can for the field.

Clark wound down the interview by talking about what he likes to watch on television and it includes True Blood and Dexter. He says he will give any series a chance though. He says he is eating well on a high protein, low carb diet and says he is looking good. Clark ended by saying he will be joining fellow safety Troy Polamalu next week in Samoa to help Polamalu with his football camp for American Samoa\’s youth from June 28 to June 30.