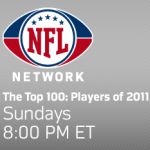 Now that the 2011 NFL Draft is complete, the NFL Network has begun their Top 100 Players of 2011 series. The top list is being billed as the first-ever countdown of the 100 Best NFL players of today, as voted on by fellow NFL players. If you were hoping for several Steelers players to make the top 100 list, you will be surely disappointed. Last night it was revealed by Lindsay Soto, Brian Baldinger and Charles Davis that only four Steelers players made the top 100 list.

In the episode last night that featured players ranked 81st to 90th, it was announced that Steelers linebacker LaMarr Woodley came in 82nd. With Woodley now out of the way, it is not very hard to figure out who the remaining three Steelers players will be and all three analyst pretty much agreed it would be Troy Polamalu, Ben Roethlisberger and James Harrison. It would surprise me as well if those three were not it.

I think you could make a solid argument that Steelers wide receiver Mike Wallace should have made the top 100 especially if Buccaneers receiver Mike Williams can crack the list as the 83rd best player. Wallace may have had 5 less regular season receptions and 1 less touchdown than Williams, but Wallace finished with nearly 300 more reception yards than Williams and averaged 6.2 more yards a catch in addition. Wallace played a huge role in the Steelers offense last year as he filled the void perfectly left by Santonio Holmes, who was traded last offseason. Without the play of Wallace, the Steelers surely would have not made it to the Super Bowl last year.

Three other Steelers player you could debate that should be on the list are linebacker Lawrence Timmons, running back Rashard Mendenhall and center Maurkice Pouncey, but I do admit you better make a pretty good argument for the two latter players. Timmons was everywhere in 2010 for the Steelers and finished 8th in the league in total tackles. He also chipped in 3 sacks, 2 interceptions, 2 forced fumbles and 9 defensed passes. He was always around the ball game-in and game-out. 49ers linebacker Patrick Willis will surely make the top 100 and so too should have Timmons in my opinion. As I mentioned, Mendenhall and Pouncey are tougher arguments to make. Mendenhall finished the 2010 season with 1,440 all-purpose yards and 13 touchdowns, but did this behind an offensive line that stayed in flux for most of the season. The anchor of that line was Pouncey, a rookie center that earned Pro Bowl honors after an impressive first year in the NFL. While Pouncey was not dominating in every game, he certainly was the best offensive lineman the Steelers had in 2010 and it is hard to imagine the Steelers making a deep playoff run without him.

Back to Woodley now, as I was a bit shocked to see him get ranked so low on the list and both Baldinger and Davis agreed in their remarks. Woodley, like Harrison, is a premier outside linebacker in the league and ranking him that low is in insult. Another 30 spots up the list is not out of the question and you have to wonder what the players were thinking that ranked him so terribly low.

It will likely be a long wait until the countdown gets to Polamalu, Roethlisberger and Harrison. All three could easily wind up in the top 25 and Polamalu might be a top 10 recipient as he is well respected by the players around the league for his play. These countdowns and list are what will fuel the offseason debates until the lockout is lifted and I am sure there will be quite a few head-scratchers moving forward from 81.

Below is the list so far following the Sunday night episode: