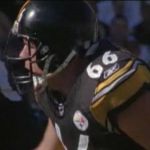 Former Steelers 1998 first round draft pick, guard Alan Faneca, has announced his retirement from the NFL today after 13 seasons. During his career Faneca earned 9 trips to the Pro Bowl and is a member of the Steelers 75th Anniversary all-time team as well. He overcame epilepsy that was discovered during his teenage years and started his rookie season after being drafted by the Steelers.

During the last minicamp of 2007, Faneca made it known that the upcoming season would be his last season in the black and gold after long-term contract extension talks broke down between the two sides. He entered the 2008 free agency period as one of the hottest offensive line commodities on the market and was immediately signed by Jets to a five-year $40 million contract that included $21 million in guaranteed monies.

At the time, several in Steeler Nation questioned the Steelers decision to not work harder to keep Faneca a Steeler for life. In the end though, Kevin Colbert and company proved to be right in not over paying Faneca for his future services as Faneca lasted just 2 seasons with Jets before being released last offseason.

The Jets reportedly had Faneca on the trading block for several weeks, but no teams wanted to take on the $7.5 million salary that came along with him, of which $5.25 million was guaranteed. Late last April the Cardinals signed the free agent guard to a one-year, $2.5 million deal that included a $300,000 signing bonus and $100,000 in workout bonuses. The signing with the Cardinals reunited him with former Steelers offensive line coach Russ Grimm as well.

The first season Faneca had with the Jets in 2008 was an above average one performance wise, but the writing was on the wall as his play dropped off in his second year in New York. His final season with the Cardinals was clearly his worst as a professional.

Faneca said on NFL Sirius Radio this afternoon that he has no regrets about leaving Pittsburgh and realized it was just part of the business. He says he will spend the extra time he has now with his family and is currently making preparations to move back home to New Orleans. He will forever be remembered as one of the greatest guards in the history of the Steelers and one day will surely be inducted into the Pro Football Hall of Fame.

His time was great in Pittsburgh, but the front office was right in letting him walk when they did. Just 3 short years after the decision to let him leave via free agency was made, Faneca is now out of football. He will never be forgotten though and we wish him well in his life after a storied NFL career. It will be a joy to see him go into Canton as a Steeler and I hope he considers getting into coaching down the road in addition, preferable back with the Steelers.

Below is his statement on his retirement:

“After a lot of thought I am announcing my retirement from Professional Football. Playing in the NFL has been a childhood dream come true. Thirteen years later I have decided that it is time to move on.

“From the dog days of training camp to winning a Super Bowl the memories are endless. The greatest memory that I will leave the game with is all of the lifelong friendships I have made

“I want to specifically thank the Steelers, Jets, and Cardinals. Each and every teammate, coach and front office employee has made a lasting impact on my life. It was a pleasure playing for first class organizations who surrounded me with incredibly dedicated individuals. I want to thank each of the beat writers that covered me throughout my career. These guys work hard and always treated me with respect. I want to also thank the fans. The roar of the crowd kept me going more than the fans will ever know.

“It is time to move on to the next chapter in my life. I can\’t wait to spend more time with my family. Playing in this league for as long as I did takes sacrifice, not only by me, but by each of them. I want to thank Julie, Annabelle and Burton for allowing me to fulfill all of my boyhood dreams. I couldn\’t have done it without you.”