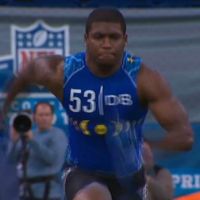 The 2011 NFL Draft is just under 5 days away now and all of the Pro Days and pre draft visits have been completed. The speculation is rampant of who the Steelers will draft in round one, should they not trade the pick, and many of the so-called draft experts and non experts have the Steelers selecting Texas cornerback Aaron Williams with the 31st overall selection Thursday night.

There are many arguments that can be made why the Steelers should not draft Williams, but for the sake of this article I will focus on the evidence that points to Williams being perhaps the odds on favorite right now by so many to be drafted by the Steelers in the first round with the 31st overall pick.

Exhibit A: Area of Need – The potential loss of cornerbacks Ike Taylor and William Gay to free agency is real. While the Steelers seem open to getting a deal done with Taylor when free agency opens, it has also been reported that several other teams might be interested in signing Taylor away from Pittsburgh. Even if Taylor returns in 2011, he will be 31 years old when the season starts and you have to wonder when age will start taking its toll on him. Gay was tendered just in case he is deemed a restricted free agent in 2011, but if he ends up being unrestricted, he too could get offers elsewhere. There are no guarantees prior to the draft that either will be on the 2011 roster. Back up nickel back Anthony Madison is also a free agent and mostly known for his special teams play and 2009 draft pick Keenan Lewis has yet to show anything in his very limited playing time. Bryant McFadden is signed through 2012, but likely will last only one more season in Pittsburgh and 2010 draft pick Crezdon Butler did not play a snap on defense in his rookie season.

Exhibit B: Possible Future Free Safety – Williams claimed he was not asked by any teams at the NFL Combine about moving to free safety at the next level, but many scouts feel like that will be his final destination if he does not work out at initially at cornerback. The Steelers do not have any depth behind starter Ryan Clark, who turns 32 in October, so at worst Williams would be the future at the position if he does not work out at a cornerback position.

Exhibit C: Everyone Present at Pro Day – It was reported that Steelers head coach Mike Tomlin, Director of Operations Kevin Colbert and new defensive backs coach Carnell Lake were all present for the Texas Pro Day in late March. Now Tomlin and Colbert attend quite a few Pro Days leading up to the draft and Williams was not the only high profile Longhorn player working out that day as well, but if you have intentions on drafting a player in the first round, it makes sense to get as may set of eyes on him as possibly at his Pro Day. Once again this is just one small piece of evidence.

Exhibit D: Pre Draft Visitor – Williams was one of the 30 players that the Steelers were allowed to have visit Pittsburgh for a pre draft visit. Just because a player is brought in for a pre draft visit does not guarantee he will be drafted, but it is just another piece of evidence that they do have some interest in him.

Exhibit E: Underclassman – Since Colbert took over in 2000, the Steelers have drafted 7 underclassmen with their first round selection. The only 4 seniors that were drafted during that time frame were Casey Hampton, Kendall Simmons, Troy Polamalu and Ziggy Hood. Williams comes out of Texas as a junior and this is just one other tiny piece of evidence. Lake of course is the new defensive backs coach and worked well with young college players in his one season coaching at UCLA. Williams is also just 21 years old.

Exhibit F: Other Targets Likely Off The Board – Mississippi State tackle Derek Sherrod, Ohio State defensive end Cameron Heyward and Baylor offensive lineman Danny Watkins have all been speculated as being potential draft targets for the Steelers in round one, but all are looking pretty likely to be off the board by the time pick number 31 roles around Thursday night. Not a slam dunk mind you, but very possible. Williams is likely not the top player on the Steelers first round big board, but if the top 3 or 4 who are ahead of him do not slide, Williams might very well be the next one on their list.

Exhibit G: Special Teams Play – If Williams is drafted he likely will not crack the starting line-up immediately. Even if he does see the field in sub-packages as a nickel or dime back, he will be expected to contribute on special teams. Williams played well on special teams at Texas and is quoted as saying he loves playing on the unit. He blocked quite a few kicks during his college career and can be used as a return man should the need arise.

Exhibit H: Good Character – A player’s character is important to the Steelers and Williams is regarded as a smart leader with good character and very unlikely to be a risk for any off field problems. He is thought highly of by his former Texas teammates and is actively involved in community service and has participated in mission trips in addition.

Just because all of this evidence is strong, does not mean that Williams will be the pick. Players fall and teams have been known to reach for other players over the years. You could make solid arguments for several other players to be drafted at 31 by the Steelers, but Williams, in my opinion, has the most evidence pointing in his favor.