The latest power rankings are out on ESPN.com and this week the ESPN NFL blogger crew tackles the head coaches. Bill Belichick ran away with the number one ranking as he garnered the number one spot on all eight of the bloggers score cards. Steelers head coach Mike Tomlin finished second as he nabbed four second place votes and two third place votes. John Clayton ranked him 5th while Mike Sando had Tomlin 6th. I can\’t wait to read that reasoning. ETA: Sando claims Tomlin works for a strong organization and that worked against him in this ranking.

I was most surprised by the finish of Andy Reid, who came in 3rd. Reid is not the best game manager in my opinion and outside of the juggling of the quarterback position in 2010, I just can\’t wrap my brain around him finishing ahead of Packers head coach Mike McCarthy. I also find it hard to believe that Mike Shanahan cracked the top 10 as well. Now Shanahan certainly has history on his side, but he handled the Redskins very poorly in his first season in 2010.

I do not read too much into these rankings as I have noted previously, but if these bloggers think so much of Tomlin, you have to wonder why he did not receive a single vote for Coach of the Year. Now I by no means was thinking Tomlin would win the award, but him not getting one vote was a huge shock. Now I realize that these rankings might take in consistency as a factor, which Tomlin also has, but the job that he did in 2010 is very underrated. He started the season 3-1 minus his starting quarterback Ben Roethlisberger. In addition, the Steelers overcame numerous injuries to the offensive and defensive line over the course of the year and developed several rookies very quickly on offense. In addition to everything else, the James Harrison witch hunt was handled fantastic. It easily could of turned into a huge distraction, but Tomlin didn\’t let it.

At the start of the season most of these same expert did not give the Steelers a chance at making the playoffs and many had them as third best in their own division. Sure the Steelers lost the Super Bowl, but even with all the turnovers and big plays allowed, they still had a chance to win it on the games final drive. Tomlin is always on an even keel and does everything with grace and integrity. He is a constant rock that never seems to get rattled. He is the perfect model of an NFL coach. At least most of these bloggers did not underrate him and you can rest assured that Steeler Nation never will. 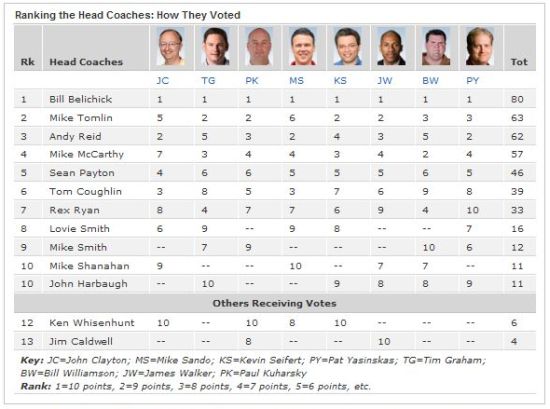