What can Brown do for you? Perhaps the better question is, what can Brown do to Stefan Logan and Arnaz Battle? If the Steelers rookie wide receiver Antonio Brown continues to make a strong showing during training camp and in preseason games, he could force the Steelers into some interesting roster decisions on the final cut down day. 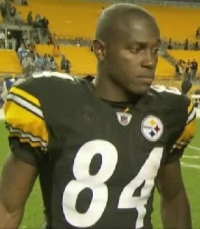 Brown has been told that he will get his chance in the return game Saturday night versus the New York Giants and if he flashes there and continues his upward development at the receiver position, both the specialist Logan and veteran receiver Battle could become very expendable. Logan is not a roster lock regardless of how Brown performs Saturday night as a return man, but head coach Mike Tomlin has made it clear that Logan will have to make the 53 man roster once again as a return man. In the first preseason game against Detroit, Logan was criticized for allowing a couple of punts to bounce in front of him instead of making a fair catch or fielding them on the fly. He had no official punt returns on the night and only two kickoff returns that both went for 15 yards.

Battle on the other hand had just one catch Saturday night for 51 yards after he slipped a poor tackle attempt late in the second quarter. Other than special team play, Battle was insignificant overall against the Lions. The only thing that might be in the favor of Battle is the three-year, $3.9 million contract he signed back in March. The deal included a $975,000 signing bonus, but by no means is he considered un-cutable because of that. In a year with no salary cap, the front office could just take the signing bonus hit to the back pocket and move on if they wish. Battle is known as a strong special teams player, so that is another plus in his favor considering the Steelers woes in 2009. If indeed a final roster cut, Battle would likely not have teams lined up for his services and could be on speed dial should an emergency arise down the road.

Back to Brown now. I caution everyone to temper their enthusiasm of him after just one preseason game. It is just that, one game. He has a long journey ahead of him to still make the 53 man roster, but is definitely sticking out thus far. It is not out of the question that the Steelers take him off of display after the Giants game as well. Although unlikely, they may have visions of sneaking him to the practice squad for some more seasoning. After a strong 2009 preseason, several in Steeler Nation swore that running back Isaac Redman would never clear waivers and make the practice squad, yet he did. He was also released once after a call up to the 53 man roster and cleared waivers once again to make it back to the practice squad later in the year. It is not out the question that Brown could end up there as well.

Fellow rookie draft pick Emmanuel Sanders is certainly a near lock to make the 53 man roster as is the veteran Antwaan Randle El. Starters Hines Ward and Mike Wallace make it 2 veterans and 2 youngsters at the position. The Steelers could keep both Brown and Battle for a total of six receivers and just carry three true running backs to start the season if they choose. If this were to happen Logan would likely be good as gone and Battle would be the first on the cutting block should a roster spot be needed going forward. All of this though still depends on Brown, who will have his hands full on Saturday night of not only passes and kicks, but roster spots as well.