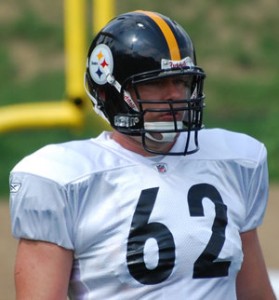 My training camp preview of the offensive line is forthcoming in about a week, but I wanted to focus in on veteran center Justin Hartwig for a post. Hartwig has been slowed all Spring and Summer following shoulder surgery and has not done much of anything in shorts during OTA sessions. Head coach Mike Tomlin said there is no reason to rush Hartwig given his experience and familiarity with the offense and it has given him a chance to get a long hard look at Doug Legursky with the first team and also have worked second year draft pick Kraig Urbik there as well in the minis. It is no secret that this years number one pick, Maurkice Pouncey, was drafted as the future center, but Pouncey has worked mostly at right guard thus far. Pouncey has been pushing Trai Essex for the starting job and with the recent injury to right tackle Willie Colon, could force Essex to play one of the tackle positions.

Back to Hartwig. Legursky, from all accounts, has been up to the task thus far and if Hartwig is slowed early on in camp, might be given every opportunity to unseat him as the starter. Hartwig is signed through the 2012 season, but one would think regardless if he sticks in 2010, it will be his last season in the black and gold. Throw on top of it that there is no penalty salary cap wise now or later if the Steelers cut him loose in an uncapped year, it could save some future monies. Now money is no object if Legursky is a step backwards, but right now it does not look that way. I have been pointing quite a bit lately to the metrics on Pro Football Focus and if you look at the 2009 center stats, you will see Hartwig in last by a long shot. If you think 2009 was a fluke, look at 2008 as well. It is no wonder why the Steelers focused in on Pouncey in round one this year. Also, how could Legursky not be a one year stop gap solution? He is signed through this year and if Urbik can indeed get time with the second team at center in pre-season, he could be the future center/guard swing man responsible for backing up Pouncey and either guard position.

The Steelers are all about having position flexibilty. Hartwig is one of the few on the line that has zero. It is center or nothing with him. Even long snapping is not in his repertoire. His spot on the 53 man roster and the money he makes could pave the way for another veteran lineman to be signed to help ease the pressure of the loss of Colon as well. It is unclear if Flozell Adams might be that type guy based on the amount of money he wants, but freeing up a 2 million base that Hartwig is scheduled to make this year, would ease the pressure on the Steelers checkbook.

In closing, I am not saying Hartwig will certainly be cut loose, but it certainly looks more likely now than it did the end of last season. Watch Big Legursky closely in camp and pre-season games. Both he and Urbik hold the future of Hartwig\’s roster spot in their hands. If I was a betting man, I would bet they make Hartwig a final cut down date casualty. How about you?