Today may seen like a normal offseason Friday, but July 15th is the deadline for franchise tag players to have new deals signed or they must play for the one-year tender amount offered by the team. Such is the case with kicker Jeff Reed who was given the franchise tag in February to keep the eight-year veteran from becoming an unrestricted free agent. Reed and his agent, Don Henderson were looking for a multi-year deal in the neighborhood of 4 million dollars a season, much like kicker Sebastian Janikowski received from the Raiders this offseason. With no salary cap in place and a future CBA still to be decided, it is not surprising the Steelers decided to just wait on this. Reed will earn $2.814 million this season and once again be an unrestricted free agent following the 2010 season. 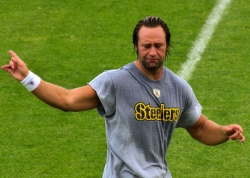 Going forward, the pressure would seem to be more on Reed this season than the Steelers. Any decline in Reed\’s accuracy due to age or added pressure to perform again in a contract year, could signal the end of his time in Pittsburgh. Reed may only have himself to blame as well, because of a few minor off the field incidents with the latest one coming after an October victory over Cleveland. Reed was cited for public drunkenness and disorderly conduct outside a bar a couple of blocks from Heinz Field. While Reed got off easy, it was just one of many tabloid like incidents that landed the Steelers on front pages in a negative light and may cost him a new deal following the season.

Make no mistake, Reed can navigate the winds of Heinz Field like no other kicker in the league and has nailed clutch kick after clutch kick as well, but I would not be surprised to see the Steelers go a different direction in 2011. Every dime could be precious if the salary cap returns and unless Reed lowers his price tag, he might be on his way to finishing his career wearing another teams jersey. If that were to come back to haunt the Steelers down the road in a key game versus Reed, that would certainly drive several Steelers fans to the local Sheetz convenience stores to rough up some paper towel dispensers in his honor. Let\’s just enjoy him while he is still here and let the chips fall where they may.