This post will ruffle feathers for sure on a Friday, but read it thoroughly before jumping to conclusions. Also this is just speculationat this point, but does bare watching. As everyone knows the Steelers have 4 quarterbacks on their roster headed into camp. This is not unusual as most will carry an extra arm to spread out the reps, especially with the 3rd and 4th team units in camp. Normally these “camp arms” are late round draft picks or undrafted college players. The Steelers however have 4 seasoned quarterbacks this year, because Ben Roethlisberger will be suspended for at least the first 4 games of the season. Almost immediately after the Roethlisberger suspension was announced, Byron Leftwich was brought back via a trade with Tampa and his contract extended. Veteran Charlie Batch had been re-signed in May to a two year deal as well. That leaves Dennis Dixon. 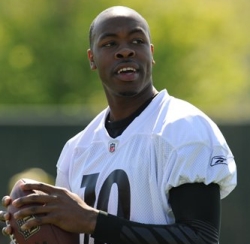 Dixon is going into the final year of his contract this year and will be a restricted free agent at that point. The Steelers seem done negotiating contracts right now for this offseason and almost never negotiate once the season starts. All that said, it is not out of the question that Dixon could push Leftwich for the starting job week one in the absence of Big Ben. For all practical purposes, Leftwich was getting most of the first team reps throughout the OTA sessions, with Dixon getting work with the second team. Dixon has all but one NFL start under his belt after jumping from the number 3 role right to starter due to injuries to both Roethlisberger and Batch last year. He turned heads and showed ability against a tough Ravens defense in a hostile environment. Although the Steelers lost the game, Dixon put the team in a position to win and did so with a scaled down game plan. Without a doubt that did not go unnoticed around the league.

The NFL is a quarterback driven league and teams are always looking to upgrade not only their starting position, but backup job as well. Dixon should get plenty of work early in games this preseason and if Leftwich has a good camp as well to hold off Dixon, the Steelers may indeed have their phones ring with inquiries about the mobile Oregon product. Dixon was once a Heisman candidate prior to his knee injury and many years removed from it as well. If the Steelers are convinced that Leftwich can do the job for the first 4 games or longer should Ben not get his suspension reduced, Dixon very well could be dangled as trade bait. Perhaps a draft pick or two or maybe even a tackle or even both. Batch will also need to prove he can handle the backup gig one more year as well. If Dixon was indeed dealt, you could see the Steelers only carry two active QB\’s on the roster until Ben returns from his suspension. They still have Hines Ward and Antwaan Randle El on the roster should an emergency situation arise. Both played QB in college as most are aware of and could do enough to get through an end of a game so a street free agent could be signed for the next week, God forbid.

In closing, do I think this happens? No, not really, but I do think it is a possibility and should not be ruled out. The Steelers could hold on to Dixon and then tender him next offseason, but I am willing to bet other teams would still take a shot on him especially if he plays and plays well in any of the first 4 regular season games this year. Even if tendered at the highest amount which would cost other teams draft picks. You know Dixon wants and thinks he can start and as long as #7 is in Pittsburgh and not injured or suspended, he is the man. If this trade were to happen, it will happen late in the preseason, so keep your eyes and ears open. You just never know.