Earlier this week the Steelers extended the contract of head coach Mike Tomlin by three years that locks him up until 2014 contractually. The timing and decision to do so could not have come at a better time. With just 2 weeks until 80 players report to Latrobe for training camp, the Steelers come off one of the most turbulent offseasons in recent memory. Quarterback Ben Roethlisberger stayed in the tabloid headlines, Santonio Holmes was sent packing to New York, numerous assistant coaching positions saw changes and three freak offseason injuries occurred. With all of this still fresh like paint, the Rooneys are in essence saying to Tomlin, we believe in you. We believe you can make all of this right and win. 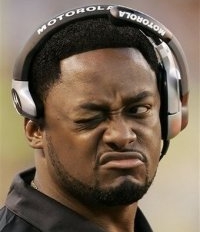 Tomlin is a blue collar coach who does not make or accept excuses. Several of Steeler Nation want to point to the 2008 Super Bowl winning team as being one inherited from Bill Cowher. I am sorry, but just because you might not have much of a roster turnover, does not mean a team won a Lombardi in spite of a different coach. As Tomlin would say, it is, what it is. In 2009, Tomlin was expected to make a run at defending the Championship. All the pieces were indeed in place, but after a 6-2 start, the team and coaching staff collapsed in a 5 game skid that doomed the chances of making the playoffs. Should Tomlin be held accountable for that? Absolutely he should and he does hold himself accountable for it. It could be easy to point to the injuries the team had or lack of effort, but Tomlin doesn\’t. I remember the collapse by the Steelers in the 1993 season when Bill Cowher was in his second season. Sure the team made the playoffs, but was one and done in a Wild Card loss to the Chiefs. I can recall Steelers fans calling for his head then.

As Tomlin heads into the 2010 season, he does so with what most would call an aging defense, a suspect offensive line and missing his two time Super Bowl winning, franchise quarterback for a minimum of 4 games. The season has not even started and most of the national media have the Steelers as the third best team in their own division and only ahead of the Browns. Do you think Tomlin likes this underdog role? You bet he does. You think he will use it to motivate this team? Damn right he will. The 2010 season will come down to the 4 game start against the likes of Atlanta, Tennessee, Tampa Bay and Baltimore minus Big Ben and how the Steelers fair in those games. If the Steelers head into the week 6 game following the bye with a 3-1 record, Tomlin will have them poised for a run through the meat of the schedule. To do so, he must unleash hell in September and he won\’t have to do so with fears of it costing him a new contract. He can do what he does best and that is to coach. When he takes this 2010 team back to the playoffs, Steeler Nation will hopefully see what a bargain they got and the method to the Rooney madness once again. Give \’em hell, Mike! Give \’em hell!