2010 was already slated to be a year in which the Steelers focused more on getting back to a power running game with much more balance on offense. The suspension of quarterback Ben Roethlisberger in April, made it even more apparent that the running game would be relied upon more heavily as well. Let\’s face it, regardless if it is Byron Leftwich or Dennis Dixon under center for the first 4 weeks, neither can be relied on to throw 33 times a game like Big Ben averaged in 2009. Now let us throw in the loss of right tackle Willie Colon. According to the offensive tackle stats on Pro Football Focus, Colon was the top ranked right tackle in the NFL using their metrics system. What is also hidden in those stats is the fact that Colon was a much better pass blocker than he was a run blocker last year using those metrics. In fact Colon graded out tied for 25th among all tackles. Now to be fair, he was working with a new right guard in Trai Essex last year and Essex graded out miserable in both pass and run blocking in 2009. Colon came in 3rd of all right tackles in 2008, when the Steelers were a bit more balanced on offense. It is pretty much a given that rookie Maurkice Pouncey is going to take over the right guard spot. It just is a matter of when. By the reports that came out of OTA sessions, Pouncey is already being talked about being the week 1 starter at right guard. It is still too early to tell who may start the year in place of Colon as well. It could be one of three players currently on the roster or an unsigned free agent like Flozell Adams or Levi Jones. Regardless the pressure will be great for them right out of the shoot.

Based on the official play direction reports from 2009, (see chart below) the Steelers ran to the right side 206 times. Up the middle 90 times and 113 times to the left. They ranked 3rd in the NFL in average gain running to right end and 4th in the NFL in average gain running at right guard. These rank averages were much better than up the middle and to the left. Now of course a few things have changed since last season. First, the offensive line will be coached by Sean Kugler, who brings in a more physical scheme to the offensive line. Kugler is younger than his predecessor Larry Zierlein and is regarded as a great teacher who can relate to his players. In addition the Steelers will likely see a true fullback more this year instead of the two and three tight end sets used by offensive coordinator Bruce Arians in the past. 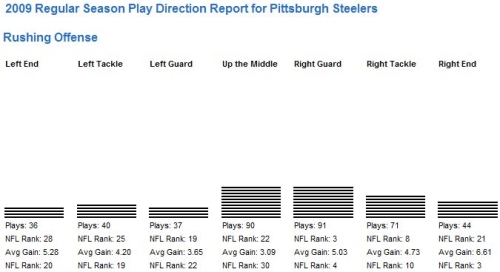 It will take a while for the right side of the line to gel this year, especially in passing situations, but Pouncey is a smart kid who is used to making line calls in college. Where they need to be sharp off the bat is in the trenches. Running back Rashard Mendenhall started to come into his own last year and has improved as a between the tackles type runner. In addition, the Steelers drafted Johnathan Dwyer who also runs north and south effectively with deceptive speed. Throw in last years fan favorite Isaac Redman and you have a stable of backs that hearken back to the Steeler days of old. Coming out of camp, this team will be built to run, especially early on in the year. The pressure is even greater with a pass protector like Colon now lost for the year with an Achilles injury. How the Steelers fair running the ball in the first 4 games of the year, will set the tone for a tough mid season schedule that hopefully will include the return of Roethlisberger under center for week 5. Having an effective running game in place at that time will make Big Ben an even more dangerous quarterback than he has ever been and the pass protection hopefully improve as the year goes along and the line gels.