Ron Cook had a great editorial this morning in the PPG and wrote how he thought that Santonio Holmes likely would not be signed to an extension in the offseason and allowed to possibly walk after the 2010 season. I could very well see this happening as well. As Cook points out, this is the 4th incident since being drafted.

Judging by the latest Tweets by Santonio on his Twitter account, I am sure the Steelers and the Commissioner will not be too thrilled as well. Tone starts off by telling a user “y u tryna make me look like the bad guy. U shud try finding the worst thing that you could drink n kill urself” Then he goes on to say this morning, “@ disney getting my grind on later tweeps! LMAO all the way to the bank!” 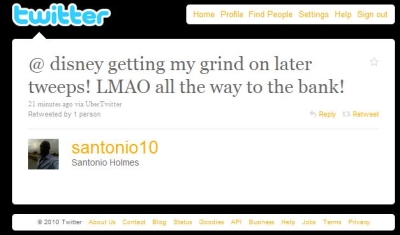 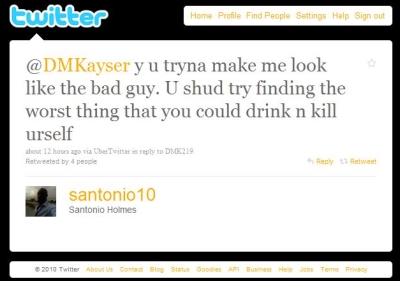 Now do not get me wrong, Tone is one hell of a talented player, but telling someone to kill themselves and that that he is laughing all the way to the bank is unacceptable. If he was joking, it is hard to tell in 140 characters or less. I am worried that Holmes is walking down the path that Plaxico Burress took that led him right out of Pittsburgh. If you remember, Burress wanted a contract extension in the spring of 2004 and he skipped a required minicamp that May. Burress was headed into the final year of his contract. He finally reported to training camp on time and finished out his last season, but was allowed to walk after the season and signed with the Giants.

With all of the negative press that the Steelers have received as of late with both Ben Roethlisberger and Holmes, combined with them signing Arnaz Battle and and Antwaan Randle El, I could even start smelling the wiff of a draft day trade. Not the most probable of scenario, but do not rule it out.

I will close with two pieces of advice for Tone. First, delete your Twitter account, and fast. Second, take the first offer the Steelers give you if you want to stay in the Steel City. If you do neither, you will likely be entering your final season of wearing Black and Gold.