Former Steelers running backs Rocky Bleier and Franco Harris will hold a dinner fundraiser at Heinz Field on Sept. 11 for the Flight 93 National Memorial. Their goal is for the $58 million memorial to open on Sept. 11, 2011 on the spot in western Pennsylvania where the plane crashed.

Quarterback Ben Roethlisberger and his foundation will donate $8,000 to the Jeannette Police Department for help in upkeep of their police dog.

Ravens wide receiver Derrick Mason may be retiring as it seems he is a little shaken by the death of friend and former teammate, Steve McNair. I would not consider this a done deal until the papers have been filed, but if he does so, expect the Ratbirds to go after a big name receiver in hurry via a trade. 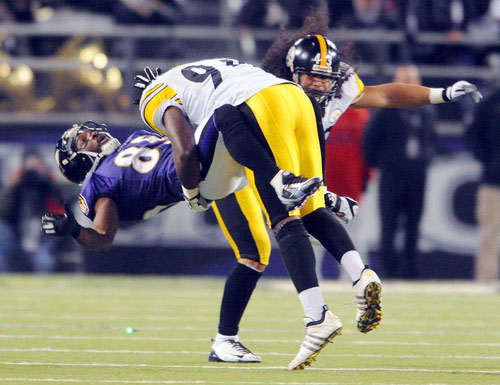 Several Steelers participated in the Urban Impact Foundation Football Clinic at Oliver High School on Pittsburgh’s North Side. Steelers.com has a good selection of photos from the event.

The Buccaneers released quarterback Brian Griese on Monday. Griese could be on the Steelers short list God forbid Big Ben were to go down with an injury. This is assuming Dennis Dixon beats out Charlie Batch and Batch is released. Not saying it will happen, just put it in the back of your mind, way back.

Updating our previous report on Stan Savran, it was announced on Friday that Savran will remain with the regional sports network, FSN Pittsburgh. He received a new contract on Friday as well.