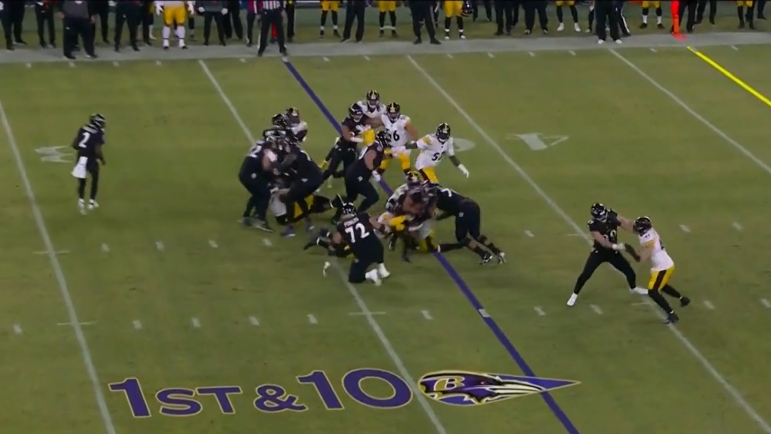 The Pittsburgh Steelers defense held the Baltimore Ravens to just 13 points last night, and one could make the argument that it should have been only nine if not for a very dubious penalty that allowed them to extend a drive at the end of the first half rather than attempt a field goal.

Though not the focal point, two defensive rookies played meaningful roles in those efforts to slow the Ravens and one of the top rushing attacks in the league down. Third-round defensive lineman DeMarvin Leal has been involved almost all year when healthy, but seventh-round inside linebacker Mark Robinson is a far more recent contributor on defense, only seeing his first snaps a week or two ago.

Robinson actually started the game over Devin Bush, who was active but played sparingly, and played a healthy number of snaps (which I don’t have accessible as of the time of this writing. Leal saw a lot of snaps because the defense used a lot of six-man fronts, he being the extra down lineman. Both drew praise from outside linebacker T.J. Watt

“Mark throws his face in the fan every time he is going to hit hard. I’m super proud of the development he is showing this year”, he said of Robinson via the team’s website. “Leal, he’s a ‘yes’ guy. He’s going to do whatever it takes to win for this team, whether it’s dropping in coverage, or rushing the passer, or sitting in the C-gap. I’m really proud of those guys”.

Robinson finished the game with seven tackles, most of them assists. Leal contributed three tackles as well. Only Minkah Fitzpatrick and Robert Spillane had more tackles for the Steelers than the rookie linebacker.

As a matter of fact, he was in on the first three plays of the game, posting a solo stop of running back J.K. Dobbins on first down after a three-yard gain. He assisted on a tackle of tight end Mark Andrews after a seven-yard completion on the following play, and then assisted Watt on a stop of no gain against Dobbins.

Five of his seven tackles, in fact, were credited as defensive stops, including both of his solo tackles. The seven-yard catch to Andrews on the opening drive was the longest play on which he was involved, finding himself consistently moving forward near the line of scrimmage.

As for Leal, all three of his tackles were in the exact same context—on Dobbins runs of two-yard gains on 1st and 10. All of them were solo tackles or as the primary tackler. But of those, these don’t include the plays the rookies didn’t make.

Fans had been clamoring for the Steelers to showcase the young players as the season wore on, though often in the context of perceiving the season as lost. Instead, they were able to get playing time for the rookies while contributing to a winning effort that keeps their postseason hopes very much alive entering the final game.