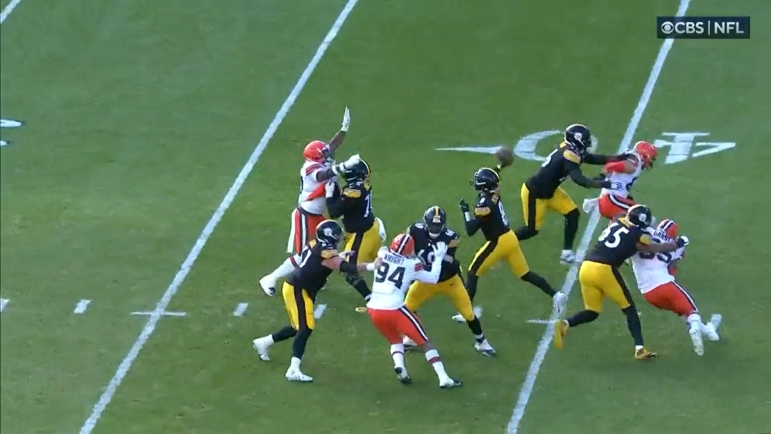 Down the stretch of the 2022 season, one position group stood out above the rest when it came to overall production and play, helping the Steelers remain in the playoff hunt.

That position group would be the offensive line, which controlled the line of scrimmage consistently from the Week 9 bye week through the season finale against the Cleveland Browns in Week 18, turning it on in the second half as they continued to gel and really come together under first-year position coach Pat Meyer.

After being heavily criticized and scrutinized throughout the offseason, training camp, the preseason and the early portion of the regular season as the Steelers got off to a 2-6 start, the young offensive line came together at the perfect time, taking off in the run game after the Week 9 bye while settling in from a pass protection standpoint in front of rookie quarterback Kenny Pickett, helping the Steelers go 7-2 in the second half of the season to finish 9-8 and just barely miss out on the playoffs thanks to a Miami Dolphins win over the New York Jets in the final week of the season.

Though it’s fair to wonder if the Steelers should upgrade the offensive line even further this offseason, particularly at the two tackle positions or at left guard, the Steelers’ group finished middle of the pack in Pro Football Focus’ end-of-season rankings coming out of Week 18, remaining slotted at No. 16 overall for the third straight week in Sam Monson’s rankings.

Coming into the 2022 season, if you would have said the Steelers finished 16th overall in the OL rankings, that would be viewed as a huge win for the franchise. It should remain that way now, as the group had significant stability and really took off in the second half in the run game, while also finishing as one of the best pass-blocking units in football.

“The Steelers started the same five linemen for every game this season, making this the most stable unit in the league,” Monson writes regarding the Steelers’ ranking at No. 16. “Pittsburgh’s line ranked seventh in PFF pass-blocking efficiency, surrendering 138 pressures on 639 pass-blocking snaps for two different quarterbacks.”

Quarterback mobility under center certainly helped in pass protection as guys like veteran Mitch Trubisky and Pickett were able to get out of dicey situations in the pocket and extend plays with their legs, wiping would-be sacks off the board for the Steelers. Though some may view that as a knock on the offensive line in general, it’s hard to see that as a negative, considering that why the Steelers were so attracted to Trubisky in free agency and Pickett in the draft.

Having that mobility in today’s game is huge.

So, too, is having the same group start all 17 games all season long, which allowed the group to come together, gel and really perform well down the stretch. Just to put those numbers in context, the Steelers’ offense played 1,160 snaps this season. Right guard James Daniels, left guard Kevin Dotson, and left tackle Dan Moore Jr. were on the field for all 1,160.

Only right Chukwuma Okorafor (one snap) and center Mason Cole (46 snaps) missed any semblance of time this season. That’s remarkable.

While the group overall played well down the stretch, there remains no true standout linchpin on the line, Monson named Daniels the Steelers best of the bunch in his season-ending article.

Steelers RG James Daniels on why the team was able to go 5-1 after a 3-7 start pic.twitter.com/agRmGxHeDw

“There is no clear-cut standout on this line, but the free-agent acquisition may have the best case this season,” Monson writes of Daniels. “He didn’t allow a sack all year and was called for just five penalties.”

Signed to a three-year deal in free agency, Daniels got off to a pretty slow start in training camp and the preseason, really raising concerns about his abilities and overall fit in the Steelers’ offense. Once the regular season started though, those concerns went away as Daniels was Mr. Dependability on the year.

Daniels allowed just 20 total pressures on the season and was called for just five penalties, two of which were accepted. That’s a very sound return on investment for the Steelers, and hopefully only gets better moving forward.