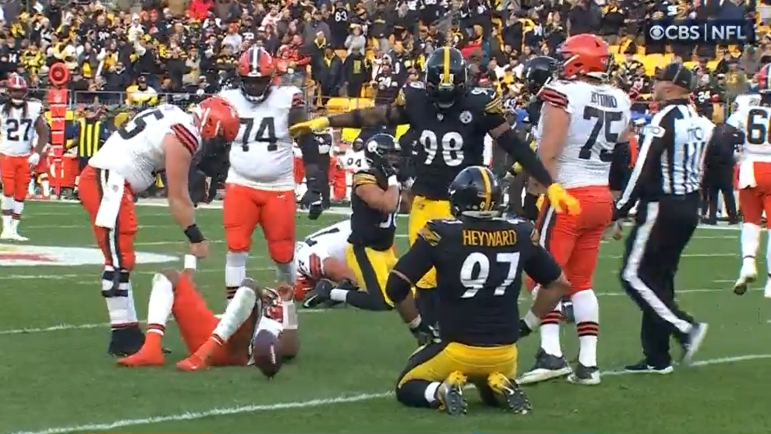 One last time this 2022 season. But we’ll empty the book with all the weird stats, both in-game and during the season.

– Missing the playoffs still stings, but the Pittsburgh Steelers’ second-half turnaround is remarkable. In NFL history, they’re now just the second team to ever start a season 2-6 and finish with nine wins. Remarkably, both teams did it this year, the Steelers and the Jacksonville Jaguars, each benefitting from a 17-game season. Jacksonville becomes just the third team to make the playoffs from a 2-6 start, joining the 2020 Washington Commanders and the 1970 Cincinnati Bengals, who started the year 1-6 and finished it 8-6, capturing the AFC Central Crown. Unfortunately, the Steelers couldn’t join that playoff company.

– The Pittsburgh Steelers scored 28 points Sunday, the most they registered in a win all season. Second-most they scored all of 2022, only trailing the team’s 37-30 loss to the Cincinnati Bengals in Week 11.

– With this blistering 28-point outburst, the Steelers officially scored more points per game in 2022 (18.11) than they did in 2019 (18.06), the year they lost Ben Roethlisberger six quarters into the season.

– Since 2007, Mike Tomlin’s Steelers are an incredible 10-1 against the Browns in regular-season finales. The only blemish came in 2020, a game in which the Steelers rested their starters (though they won other finales starting backups).

– Yesterday, Kenny Pickett went just 13/29, a 44% completion rate, but did enough to net the victory. He’s the first Steelers’ QB to throw more than 25 passes in a game and complete fewer than 45% of them since Ben Roethlisberger in 2008, a game the Steelers lost to the New York Giants (the James Harrison long snap game). Just like Pickett, Roethlisberger went 13/29 with a touchdown (though Roethlisberger also threw four interceptions).

Pickett is the first Steelers’ QB to win under those circumstances since legend Kent Graham in 2000, who went 13/33 for 170 yards, one touchdown, and no picks in a 15-0 win over the Cincinnati Bengals.

Since 2020, Pickett is one of only two quarterbacks to win that way, joining Buffalo’s Josh Allen in Week 17 last year who beat the Atlanta Falcons, going 11/26 for 150 yards in a victory.

– The Steelers finished the year with only 12 touchdown passes, their fewest since 2000 and only the second time since 1990.

– Pittsburgh didn’t throw more than one touchdown in any game this season. They’re the first team since the 2011 St. Louis Rams to “accomplish” that and only the third of the century, joining – for the second mention of this article – the 2000 Cincinnati Bengals.

Since the NFL moved to a 16-game season in 1978, this is the first time Pittsburgh’s failed to throw multiple touchdown passes in any of their games.

– Najee Harris is the first Steeler with 1,000+ yard rushing seasons in his first two years. No one else in Pittsburgh’s ever done it.

– Derek Watt tripled his career touchdown total from one to three. He had a rushing and receiving score this year, the first Steelers’ FB to do so since Roosevelt Nix in 2017 and only the third of the century (so long as you count Chris Fuamatu-Ma’afala one, he was sort of a running back and fullback).

– Connor Heyward is only the third Steeler rookie to be a 200th+ overall selection and finish his first year with 10+ receptions and 100+ yards. He’s the first since WR Joey Clinckscales, who took advantage of the player’s strike in 1987, and RB Rich Erenberg in 1984.

– Diontae Johnson’s 86 receptions without a touchdown is an NFL record for any player, regardless of position. He breaks a near-40-year-old record, surpassing RB James Wilder, who caught 85 in 1984. For history’s sake, Wilder didn’t find the end zone on 53 receptions the following year so hopefully Johnson doesn’t surpass that streak either. Odds are good he won’t.

– Let’s flip over to the defense. Lots of sack stats here. Since sacks became official in 1982, here are the top-three sack leaders through a player’s first three seasons.

So the Steelers’ current bookends sit in two of the top three spots though Watt has lots of distance between him and Highsmith.

– Here are the Steelers’ top-five sack leaders in franchise history, including the “unofficial” ones.

Jason Gildon officially falls into sixth place and Heyward, not Watt (due to the injury, of course) finishes in the top active spot. Heyward may beat Watt to the sack record though Watt will one day own it. It’ll be fun watching those guys compete for Deebo’s record next season. One of the top numbers we’ll be tracking.

– Make it now the last four games in which the Steelers have had 7+ sacks, they’ve come against the AFC North. The Bengals in Week 1 of this year, and the Browns and Ravens in 2021.

In the Tomlin era, this now marks the sixth time the Steelers have sacked the Browns 7+ times in a game. That’s 18.8% of all the team’s regular season matchups and makes up 42.9% of the team’s such games against any opponent since 2007. In other words, the Browns are good to boost sack totals.

– Unfortunately, the Steelers’ sack streak of five seasons with 50+ sacks ended this year. Despite the finale’s surge, Pittsburgh finished with only 40.

– Despite missing half the season, Watt finished the year with 5.5 sacks, third on the team, the first Steeler since LaMarr Woodley in 2011 to play no more than 10 games and have at least five sacks.

Heyward becomes the second Steelers’ defensive lineman to do it in back-to-back years, joining John Baker who did it in 1964 and 1965. If you aren’t familiar with Baker, he’s the one who hit QB Y.A. Tittle that led to this photo, one of the most iconic football shots of all time.

Stay with me on this one. Heyward is the NFL’s first defensive lineman with consecutive 10+ sack seasons, both of which took place in a player’s age 30+ season, since Calais Campbell did so in 2017 and 2018.

Heyward didn’t make the Pro Bowl but he’s had a statistical surge since those rosters were announced. We’ll see if he can make the All-Pro team.

– One more from Heyward. Maybe my favorite stat of the weird of the season.

Cam Heyward had a sack on the Steelers’ first defensive play of the season, way back in Week 1 against the Bengals.

Cam Heyward had a sack on the Steelers’ last defensive play of the season, taking down Deshaun Watson on 4th and 10 as time expired.

– CB Levi Wallace entered this year never having picked off more than two passes in a season. This year, his first in Pittsburgh, he finishes with four.

– The Steelers’ defense held their opponent to 17 or fewer points in their final seven games, making them only one of two teams (the 49ers the other) to have such a streak this year. It’s Pittsburgh’s first since 2001.

– Last one. The Steelers’ third down offense since the bye is a remarkable turnaround that reflects what the entire team did. Here’s their third down percentage before and after the bye.

Hope you all enjoyed the weird stats. See you next September.