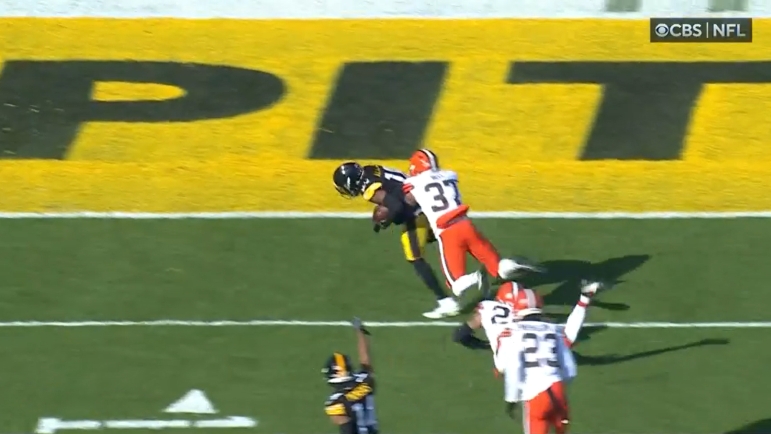 The Pittsburgh Steelers might not be going anywhere this season, but they have had a few moments immortalized in history, both collectively and individually. They have rookie quarterback Kenny Pickett’s historic game-winning drives, for example. They also have wide receiver Diontae Johnson setting an inauspicious, yet highly obscure and admittedly marginally relevant record.

With his two receptions on Sunday on 10 targets, Johnson officially recorded the most receptions in a single season without scoring a single touchdown of any kind, or of a receiving touchdown specifically. He was already on pace entering the day to set the latter record provided that he failed to find the end zone in the traditional manner, but it took both of the day’s catches to achieve the latter.

Former Baltimore Colts Hall of Famer Raymond Berry caught a career-high 75 passes in the 1961 season, yet he failed to score a single touchdown. It was a remarkable aberration considering he had 10 the year before that, and led the NFL in receiving touchdowns two years running in the two immediately preceding years.

It was the only season since his rookie year in 1955 that he failed to score, and since 1961 he held the distinction of having the most receptions in a single season without ever scoring a touchdown, until Sunday when Johnson managed to come short of the end zone for a touchdown with 86 grabs on the season.

Johnson had 84 receptions before kickoff. He exited with 86 and no touchdowns. So he now owns both records: the most receptions in a single season without a receiving touchdown or without any touchdown of any kind.

Now, is anybody going to remember this record next year, aside from the people who dislike Johnson? Probably not, unless some other prominent player has a bunch of receptions without getting into the end zone and the broadcast puts a graphic up on the screen.

In a mild bit of irony, the truth is that Johnson did find the end zone twice this year, including during Sunday’s game. Only they were on two-point conversions. He did score four points this year, two-thirds of the way to a touchdown, but they don’t count as official targets, receptions, or yards, let alone touchdowns.

He ends his fourth season having caught 86 passes on 147 targets for 882 yards with zero touchdowns, plus 25 rushing yards on seven attempts. He officially had one fumble, the lowest total in his career, though he got lucky twice. Nobody more than the man himself demands better in 2023.