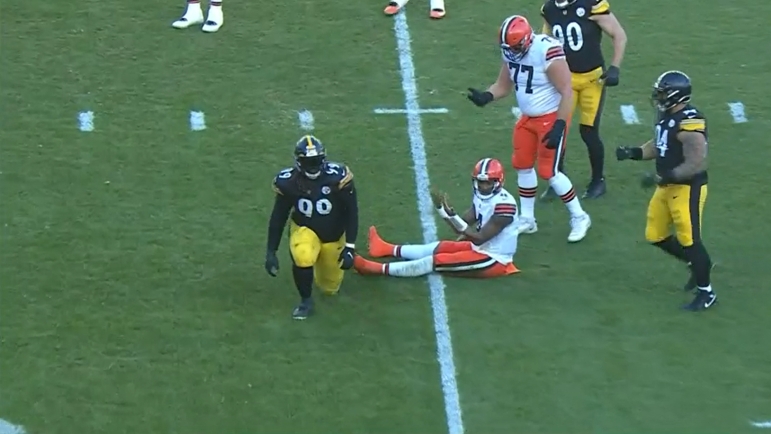 Even though missing the playoffs leaves a bit of a bad taste in the mouth following a rather trying 2022 season for the Pittsburgh Steelers, the way the young members of the black and gold closed the season out should have everyone feeling rather optimistic overall moving forward.

The optimism should be relatively high following a 28-14 win over the Cleveland Browns at Acrisure Stadium Sunday to close out the season, a game in which the Steelers ran the football very well overall against Cleveland, hit some big plays in the passing game and really got after Browns quarterback Deshaun Watson, sacking him seven times and picking him off twice in the win.

Pittsburgh took care of its own business down the stretch in the playoff picture and really showed signs of improvement on both sides of the football. That creates a good feeling overall moving forward.

Let’s get to some grades and get into the offseason.

In the final game of the regular season, coming off of two game-winning drives in the final minutes in back-to-back weeks, Kenny Pickett got off to a pretty poor start against the Browns.

He missed high over the middle multiple times and simply looked off. To Pickett’s credit though, he rebounded in strong fashion, getting back on track with a short pass to tight end Zach Gentry off of play-action on a rollout that settled him down. From there, he was in sync with fellow rookie George Pickens on back-shoulder throws down the sideline and really had command of the offense.

Pickett did have some throws batted at the line of scrimmage in the red zone looking for Diontae Johnson, but he did bounce back with a great throw on a two-point conversion to Johnson late in the fourth quarter.

Overall, the numbers aren’t eye-popping (13-for-29, 195 yards, one touchdown), but after a slow start, he looked rather good down the stretch.

Early on, Najee Harris looked like he was going to be a force to be reckoned with in the Week 18 finale. He ran hard between the tackles, consistently picking up chunk yardage, barreling downhill and bludgeoning the second and third levels of the Browns’ defense. He even showed off some great lateral burst and agility, making guys miss in space.

Then came the bizarre touchdown run that was ruled down at the 1-yard line and wasn’t reviewed, which ultimately led to a Harris fumble two plays later when he tried to dive over the pile. Harris should have had two rushing touchdowns on the day. Overall though, he was very solid, finishing with 84 yards on 23 carries, recording a long of 11.

He was consistent on the day carrying the football until the fourth quarter when the Browns adjusted and the Steelers were very clearly seemingly taking the air out of the football. Harris finished his second season on the upswing. That’s positive.

Behind him, Jaylen Warren went out with a bang, finishing with six carries for 36 yards, including a 22-yard run on the second play from scrimmage in the second half that really took the wind out of the Browns’ sails. Warren ran hard and was very explosive on Sunday, looking like he was shot out of a cannon as soon as he touched the football.

The 1-2 punch of Harris and Warren will be very fun moving forward.

George Pickens was absolutely incredible on Sunday. He could not be guarded, and yet he only saw six targets. Pickens turned those six targets into three catches for 72 yards and a touchdown from 31 yards out, but he was robbed of another incredible sideline grab in which he very clearly caught the ball and got his feet down in the last two minutes of the first half.

Officials chose not to review it though, taking away a big play. Outside of that play, Pickens couldn’t be stopped. He dominated Cleveland cornerback Martin Emerson Jr. throughout the afternoon, drawing a pass interference in the end zone that set up Derek Watt’s touchdown, and also scored on a 31-yard pass from Pickett, taking advantage of a blown coverage from the Browns.

Diontae Johnson came into the game looking for his first touchdown of the season to avoid making NFL history in a negative way. The Steelers tried scheming a score up in the red zone multiple times. It just wasn’t meant to be. He also had a maddening start to the game, too, dropping his first target, then following it up with a 32-yard catch-and-run, before then dropping his next pass that was fortunately overturned from a fumble to an incomplete pass after review.

Johnson saw 10 targets on the day and really couldn’t do much of anything. He finished strong though with the 2-point conversion.

Behind Johnson and Pickens, I liked what I saw from Steven Sims and Gunner Olszewski. Olszewski had a great block on the perimeter for the second straight week, this time springing Sims on the 16-yard jet sweep. Sims didn’t have a target on the afternoon, but he was on the field a lot and helped open some things up with his speed.

It stings to lose Pat Freiermuth to a knee injury in Week 18, but it sounds like it won’t require surgery, which is great news. Prior to the knee injury against the Browns though, Freiermuth was mostly non-existent in the passing game, seeing just two targets overall. He was utilized as more of a blocker in the matchup, which is actually how he was injured.

He was average as a blocker, which was an improvement from his last two games in that department.

Gentry had the big 23-yard catch-and-run that seemingly sparked the Steelers’ offense, and he did a nice job on the edge throughout the game as a blocker, helping create lanes for Harris and Warren.

Connor Heyward stole the show though. He was a fantastic blocker overall on the day and came up huge in the passing game, making an incredible 27-yard catch over the middle in which he leaped and twisted behind him to catch the football a few plays after Freiermuth exited with the injury. Heyward again showed off that any time he gets an opportunity, he produces.

Heyward finished with three catches for 45 yards, including a third-down conversion to help set up Watt’s 1-yard touchdown run. Hopefully he sees more snaps and more targets next season. He can be a real factor.

Throughout much of Sunday’s regular season finale, the Steelers ran the ball rather well, taking it to a soft Cleveland front. On the day, the Steelers ran for 148 yards and two touchdowns on 37 carries, averaging 4.0 yards per carry. When Pittsburgh was working downhill in the running game, the offensive line was really in a groove, dominating the line of scrimmage.

They had their struggles in pass protection though. It felt like Pickett was under siege throughout the game, even though he was sacked just once and hit just twice. However, the Steelers allowed 16 total pressures on the afternoon.

Dan Moore Jr. and Chukwuma Okorafor struggled on the edge, while Kevin Dotson, James Daniels and Mason Cole allowed some pressures on the interior. Moore Jr. allowed a sack by Myles Garrett rather quickly around the edge in the red zone and really had his hands full throughout the day.

The run game numbers look great for the Browns overall — 22 carries, 134 yards (6.1 ypc) — but that wasn’t really reflective of how the game went overall.

Nick Chubb had a lot of success in the first half, but the Browns got away from him on the ground. It helped that after a strong first two drives, the Steelers really settled in against the run, thanks to their defensive line. Cameron Heyward and Larry Ogunjobi were terrific on the afternoon, dominating at the point of attack throughout the matchup.

Both got after the quarterback at a high rate, too.

Heyward finished with eight tackles, two sacks, two tackles for loss, one pass breakup and four quarterback hits, while Ogunjobi finished with three tackles, one sack, one tackle for loss and one quarterback hit, and added a team-high eight pressures. Ogunjobi did get away with a face mask on his sack, but Heyward was called for a rather weak roughing the passer on a sack of Watson, wiping it out.

Outside of Heyward and Ogunjobi, Montravius Adams, DeMarvin Leal and Isaiahh Loudermilk provided some serviceable snaps in the win.

If this grade were just for the outside linebackers, this would be an easy A.

Alex Highsmith was simply incredible, finishing with eight tackles, 2.5 sacks, two tackles for loss and three quarterback hits. He set the edge very well against the run and absolutely abused Cleveland left tackle Jedrick Wills all game long. The 2.5 sacks gave him 14.5 on the year. Up next: a sizable contract extension.

Opposite Highsmith, T.J. Watt looked like his old self again, finishing with three tackles, half a sack and a quarterback hit. He generated six pressures, tying Highsmith with six as well in the win.

Of course, this grade also includes the inside linebackers, and this group was dreadful.

Mark Robinson looked a bit overwhelmed in the season finale. He missed two tackles and was just playing far too out of control. Myles Jack split reps with him and was all over the place against the run, in a bad way. Slow to get off blocks, laboring to move. That groin is really limiting him.

Robert Spillane never came off the field, and while he had eight tackles, he had a huge holding penalty that extended the Browns’ scoring drive and really was picked on in coverage.

The Browns hit some explosive plays on the day — Amari Cooper for 36, Donovan Peoples-Jones for 38 come to mind — but overall the Steelers’ secondary was very sound in their first look at Deshaun Watson as a Brown.

Levi Wallace and Damontae Kazee picked off key passes, setting up scoring drives for the Steelers, while Minkah Fitzpatrick was all over the field, finishing with a game-high 10 tackles.

Terrell Edmunds was good in the box again, finishing with five tackles, a sack and a key third-down pass breakup on the first drive of the game to get the Steelers off the field. He had his issues in coverage though against Njoku, allowing an 18-yard completion in the fourth quarter.

The kicking game came up huge for the Steelers in the season finale.

Chris Boswell drilled both field goals, hitting from 49 in the win over the Browns, while Pressley Harvin III had one of his best showings as a Steeler, averaging 48.0 yards per punt, downing one inside the 20-yard line while also recording a long of 57 yards.

Kick coverage remains a mess though. The Steelers struggled to contain Jerome Ford in the kickoff return game as he recorded a long of 35 and gave the Browns decent field position throughout the game. Missed tackles were an issue again, as were penalties.

Sims also nearly gave the football away late, too, on a punt return, muffing it but recovering it quickly.

Danny Smith’s group just couldn’t stay out of its own way down the stretch.