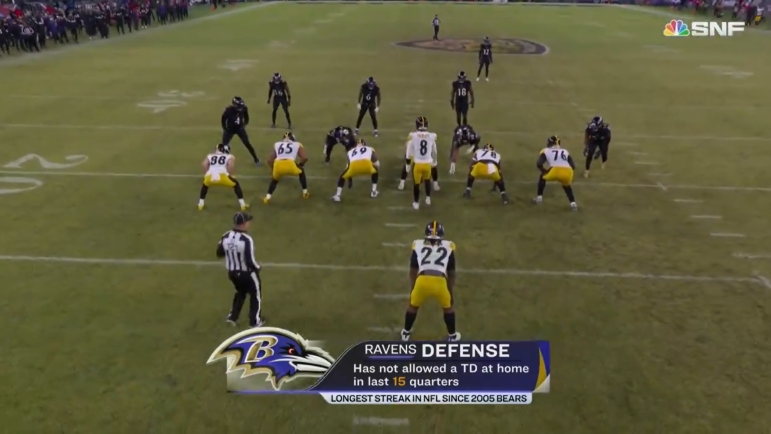 In the Super Bowl era, there have been 21 instances of a team going at least three complete consecutive home games without allowing a single touchdown. Two teams did it for four games; the 2003 New England Patriots and the 2005 Chicago Bears. Both streaks ended there.

The 2022 Baltimore Ravens very nearly joined them on Sunday night if not for the Pittsburgh Steelers’ last-minute heroics. Rookie quarterback Kenny Pickett’s game-winning touchdown pass to running back Najee Harris with 56 seconds remaining ended a 15-quarter streak for the home team in not allowing a touchdown, the longest streak since the 2005 Bears.

The last time the Ravens had allowed a touchdown in Baltimore prior to the end of Sunday’s loss to the Steelers was in Week 7 when they beat the Cleveland Browns by a 23-20 margin. The Browns had two rushing touchdowns on the day, including one in the fourth quarter.

After that, they held their next three opponents without a touchdown when visiting the Ravens. The Carolina Panthers managed just three points in Week 11, while the Denver Broncos and Atlanta Falcons each mustered a trio of field goals in losing efforts in Weeks 13 and 16, respectively.

They made it through the first three quarters against Pittsburgh before giving up their first touchdown at home since before Halloween, indeed, surviving about the first 14 minutes of the fourth quarter, resulting in their third home loss of the year.

Back in 2005, the Bears held the Vikings, Ravens, 49ers, and Panthers without a touchdown in four consecutive home games, allowing a total of 21 points in that span between Week 6 and Week 11. The last home touchdown they had allowed prior to that was to Chad Johnson in the fourth quarter. The next one they gave up was to the Green Bay Packers in the second. So in all, they went 17 quarters without allowing a touchdown.

The 2004 Patriots only allowed nine total points during their own four-game home streak of preventing opponents from scoring a touchdown. They did allow a fourth-quarter touchdown in the game prior to that but did not surrender their first touchdown after the four-game streak until the fourth quarter of the fifth game, so they went 19 quarters without allowing a home touchdown.

That’s a modern-era record, but the Steelers did post two streaks of at least three games, one of only five teams with multiple such streaks. They lasted three games both in 1976 and 1996.

This Steelers game was more than happy to hold the Ravens’ own streak to just three-plus games because they very much needed that last-minute touchdown to keep their 2022 playoff hopes alive. The fact that they ended the streak was just a nice little bonus they probably weren’t even aware of. But now you are.