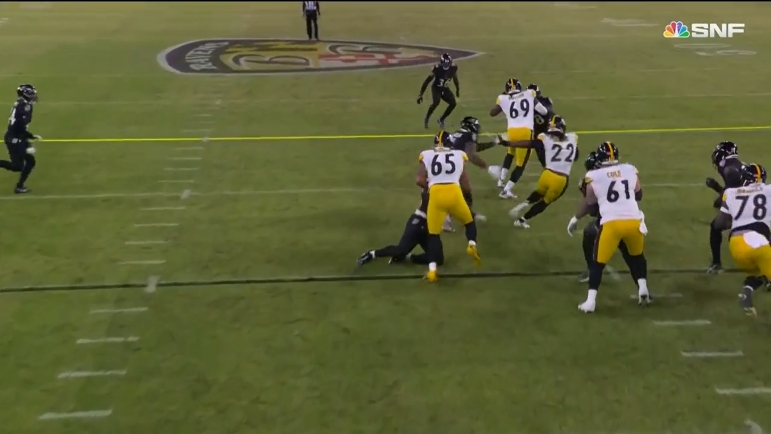 Three weeks after being bullied in the trenches and failing to have any sort of consistent running attack in a 16-14 loss to the Baltimore Ravens, the Pittsburgh Steelers came out on Sunday Night Football with a ton to play for in the playoff picture and were the bullies.

In a thrilling 16-13 comeback win over the Ravens at M&T Bank Stadium on Sunday Night Football, the black and gold rushed for 198 yards on 41 carries, dominating in the trenches offensively from start to finish, doing largely whatever they wanted to do on the ground in the win.

Second-year running back Najee Harris cracked 100 yards in a game for the first time on the season, finishing with 111 yards on 22 carries, while backup running back Jaylen Warren finished with 76 yards on 12 carries, including a game-high run of 31 yards on a jet sweep off of left tackle.

Following the thrilling win in which the Steelers were ultimately the bullies, Harris appeared on the NBC broadcast with host Melissa Stark and praised his offensive line, stating that they played their “ass off” in the win, helping the Steelers control the line of scrimmage and punch the Ravens in the mouth.

“Man, the o-line controlled the whole game,” Harris stated to Stark, according to video via NBC. “Shoutout to the o-line. From where we started to where we’re at, we’ve turned it around from the bye week, stick together through all the negativity from the media and all the outside noise, we really stuck together and made the most of the opportunities.

“Really, what won the game was the o-line. The o-line played their ass off. This is good a good defense at stopping the run. I think it was very physical. …They did a good job of controlling them, and gave us plenty of room to work.”

Challenged by head coach Mike Tomlin earlier in the week, the Steelers offensive line responded once again in a massive way, taking the onus on themselves to punch back against the Ravens and really win a tough, hard-fought AFC North battle that has become the standard for Steelers-Ravens matchups.

Throughout the contest Harris was running possessed, as analyst Chris Collinsworth said at one point. He was running hard, breaking tackles and really dishing out punishment on the ground, wearing down a tough Ravens front. The pile consistently fell forward throughout the night, and when that happens with a running back the size of Harris, that can be demoralizing.

Warren was the perfect change-of-pace on the night, too. He was able to rip off the early 31-yarder on the jet sweep and then really ran hard between the tackles with speed and power, helping the Steelers continue to roll downhill behind the likes of Dan Moore Jr., Kevin Dotson, Mason Cole, James Daniels and Chukwuma Okorafor.

While Harris, Warren and even rookie quarterback Kenny Pickett will get the headlines after the thrilling win, the offensive line did the work and dominated from start to finish, helped the Steelers punch back and remain alive in the AFC playoff race.