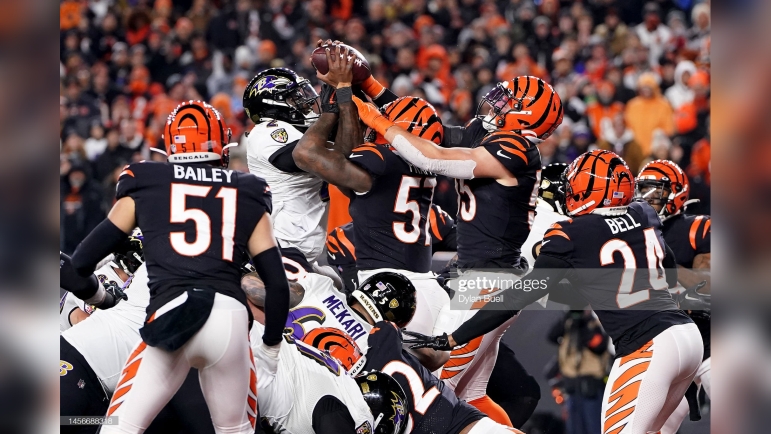 The Baltimore Ravens were competitive in their playoff loss to the Cincinnati Bengals this past weekend. In fact, they were a yard away from taking a seven-point lead a few minutes into the fourth quarter when the unthinkable happened.

Backup quarterback Tyler Huntley, starting due to Lamar Jackson’s injury, dove over the line to try to break the plane. It didn’t quite work, as he was met in the air by linebacker Logan Wilson. He punched the ball out and Sam Hubbard plucked it out of the air, returning it 98 yards for the go-ahead and game-winning touchdown.

Unsurprisingly, it got people talking, including Pittsburgh Steelers quarterback Kenny Pickett, who discussed the play with Cameron Heyward on his Not Just Football podcast. “Personally, unless it’s fourth down [and] this is the last play, I think that’s the only time when you should really reach the ball over the top, especially where they were at”, he said.

The official line of scrimmage was the one-yard line, which is generally reasonable, but it was a good, full yard. Watching the replay, Huntley seemed to make little effort to really diagnose where he should go with the ball, which Pickett cites as his mistake.

“Personally, I catch the ball out of the snap and I kind of like to read the front”, he said, which he has discussed previously. “I like to read where guys are slanting. If I feel like they’re pinching the A gaps hard, I’ll kind of weave to the B gap and I’ll try to find that soft void in the front of I can”.

Pickett was very successful executing quarterback sneaks this season, although most have been, and it helps that the trend of using ‘pushers’ behind the quarterback to help push them over the line has become prevalent. The Steelers haven’t always done this, but they certainly benefited from it on occasion

“I never feel the need to jump over the top just because of the risk of losing the ball”, he said “and knowing that I got guys behind me that could help push you. Najee saved me one time against the Ravens, pushing me forward for a first down”.

Najee carried Pickett to the first down 😂 pic.twitter.com/XnUoOzYnr6

Huntley only had a handful of rushing attempts in sneak situations. He attempted three against the Steelers, converting two, with the third one resulting in a fumbled snap, which resulted in a turnover on downs.

It’s fair to say that Huntley’s spectacular failure of a sneak attempt played a critical role in the Ravens being sent home. Inches away from the goal line, the play resulted in a 14-point swing. Of course, they could have come back and scored afterward as well, but it’s hard to recover from that gut-punch play.