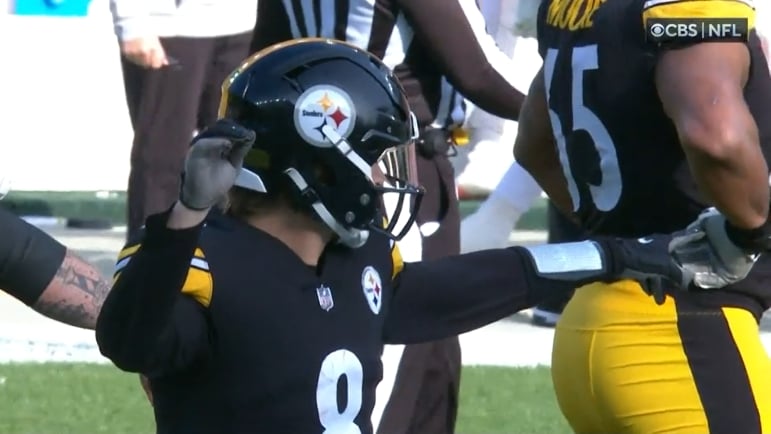 Even though the 2022 season came to a disappointing end for the Pittsburgh Steelers with the Miami Dolphins beating the New York Jets to keep the Steelers out of the playoffs, it’s hard to not be encouraged with the way the Steelers played down the stretch.

As is well known, the Steelers rebounded from a 2-6 record at the bye and a 3-7 record after Week 11 to finish 9-8 on the year, extending Mike Tomlin’s non-losing seasons streak to 16 seasons, while also seeing serious signs of life from the offense under second-year coordinator Matt Canada and championship-level football from the league’s highest-paid defense.

Not to mention, rookie quarterback Kenny Pickett looked like the real deal down the stretch, leading back-to-back game-winning drives in Weeks 16 and 17 to keep the Steelers alive in the playoff race, and second-year running back Najee Harris looked like that special talent the Steelers envisioned at running back when they drafted him in 2021.

The Steelers rookies keep coming up huge on third down.

First-round pick Kenny Pickett goes down the seam and layers this ball over the defender to sixth-round pick Connor Heyward who makes an incredible adjustment for the first down snag. pic.twitter.com/NPPAga3oNP

Missing out on the playoffs stings, but the future is very bright for the Steelers. That starts with Pickett, who showed that he can be the franchise quarterback for the Steelers moving forward. He can make all the throws, has great moxie overall and is the rising tide that lifts all boats in pressure-packed situations.

Speaking after the win over the Browns Sunday and asked what he showed teammates, Pickett didn’t quite have an answer, deflecting to asking that question to teammates. However, he added he wants to be consistent and is excited to attack the offseason and make a leap from his rookie season to his second year, which should have everyone excited.

Kenny Pickett addresses the media following our game against the Browns. pic.twitter.com/mu8i4fuoOh

“That’s a good question. I’m not really sure. I think you have to ask them, but I just wanna be consistent. I wanna be a consistent guy, consistent leader. I wanna continue to improve,” Pickett stated to reporters, according to video via the Steelers official YouTube page. “I don’t think I’m anywhere close to…what I can be and what I’m going to be. So, I’m excited to attack the off season and take that leap in a year or two.”

Consistency — on the field — is the next step for Pickett when it comes to being a franchise quarterback in the NFL.

While the late-game heroics are great and all, being consistent and playing at that level throughout games is ideal, which will need to be where Pickett improves and finds that rhythm and confidence right away in games. Once he finds that consistency, the Steelers will be tough to stop offensively.

As far as being a consistent leader, Pickett doesn’t seem to have anything to worry about there. Guys believe in him, rally around him and really buy into everything he does. Being able to achieve that as a rookie, especially at quarterback, is remarkable from Pickett. Leadership will never be in question with him.

We’ll see how he attacks the offseason and what he focuses on in general to try and find that second-year leap, but based on how he closed his rookie season, it’s hard to not be optimistic about Pickett’s future moving forward in the Steel City.