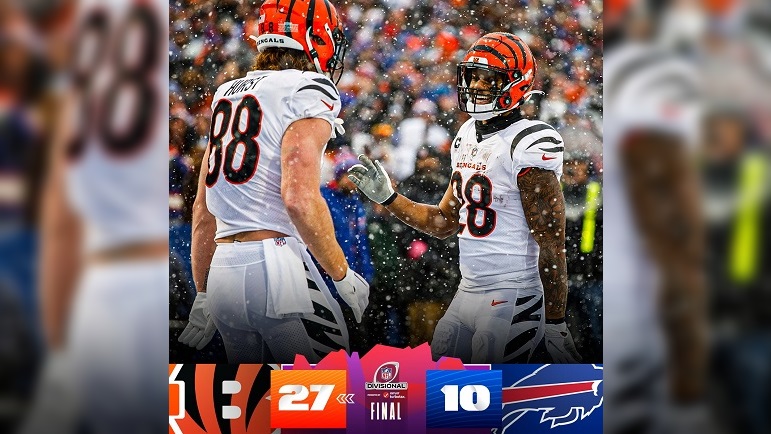 But they’re also 0-3 in Super Bowls. Is this the year the Bengals finally change that? They certainly look to have the talent. And having the edge has never been a problem. They’ve seized onto whatever narrative they can for motivation, the latest being the NFL selling tickets to a potential neutral-site AFC Championship game between the Kansas City Chiefs and the Buffalo Bills.

If only the Bills had been able to beat the Bengals, of course. “Better send those refunds”, quarterback Joe Burrow joked after the game, as the NFL will now have to reimburse those fans who purchased tickets for a potential Atlanta-based conference final.

The league decided to alter the rules for this postseason due to the unique nature of the season following the cancellation of a Week 17 game between the Bengals and the Bills. Because that game not being played made it impossible for Buffalo to secure the number one seed over the Chiefs, it was decided that if the Chiefs and Bills were to advance to the conference finals, neither team would play at home.

Meanwhile, it was also decided that, had the Bengals lost to the Baltimore Ravens in Week 18, then they could have potentially had the host for a postseason matchup decided by a coin flip. Running back Joe Mixon was fined for celebrating a score in Week 18 by pulling out a coin and flipping it.

The team formally complained to the league about how the rules were changed in ways that seemed to disadvantage them, yet it also guaranteed that they would win the AFC North when the NFL decided to cancel the game between the Bengals and Bills.

Even former Steelers cornerback Mike Hilton took a jab at the situation, tweeting after his Bengals’ win last night that he would see everyone in Atlanta. In reality, the AFC Championship game will be hosted by the Chiefs in Kansas City.

That’s where these same two teams squared off last year, with Cincinnati coming out on top. They proceeded to come within a minute of winning their first-ever Super Bowl. The same road as last year is in front of them. Can they make it all the way to the end this time?