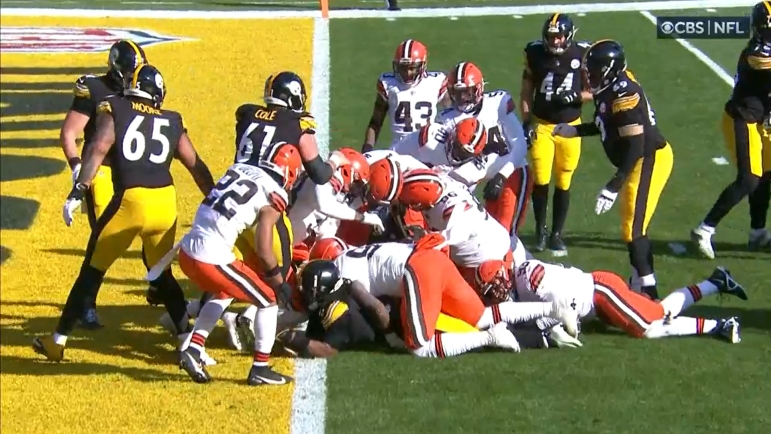 One of what had the potential to be the most pivotal moments in the Pittsburgh Steelers’ regular season finale against the Cleveland Browns, a must-win game, was a three-play sequence in the middle of the first quarter. They, fortunately, rendered it moot, but it felt like a catastrophe at the time.

The Steelers had the ball at the Browns’ 2 on 1st and goal. It certainly appeared as though running back Najee Harris successfully crossed the goal line for what should have been a touchdown, but the officials ruled that his knee was down—which it wasn’t. They even talked about it on the broadcast.

Instead of challenging the ruling on the field, head coach Mike Tomlin decided to go with a quick count quarterback sneak with Kenny Pickett to try to catch the Browns off-guard. He didn’t get in either, and Harris on third down got stuffed, having the ball jarred loose for a fumble that Cleveland recovered.

It only served to make the decision not to challenge it, in hindsight, all the more baffling for those observing, including former Steelers quarterback Ben Roethlisberger, who was at the game. He spoke about it on the latest episode of his Footbahlin podcast.

Roethlisberger played the vast majority of his career with Tomlin as his head coach and surely has been in this situation on more than one occasion during that time. And it’s not as though he had no explanation, even if he did say that Tomlin should have somebody watching the game for him.

“To his defense, it’s like, ‘Okay, it’s gonna be 3rd and 1, whatever it is, you’ve got two downs to get it in, so it’s like why waste it and mess with a challenge when you know you’re gonna score?”, he said “Obviously you don’t know a fumble’s coming. So part of me gives him an okay with that”.

You only get two guaranteed opportunities to challenge the ruling on the field during a game. If you use both and win both challenges, you get a third. You lose a timeout for challenges that you don’t win, so it’s not without risk to use one, and Tomlin’s track record with challenges in recent years hasn’t been great.

This one, however, certainly appeared to be rather cut and dry. Watching the replay, you can understand how the officials watching the play live might have assumed that Harris’ knee must have touched the ground, but it’s very apparent upon second viewing that he was able to stretch his leg and keep it elevated.

But, as mentioned, the Steelers managed to render the point moot in spite of the lost opportunity. That was their opening drive, and they punted on their next two possessions, but they would score five times on their remaining six possessions, ultimately winning 28-14, their largest margin of victory of the season—only one of two with a two-possession lead or better.

Yet, Tomlin still should have challenged it.