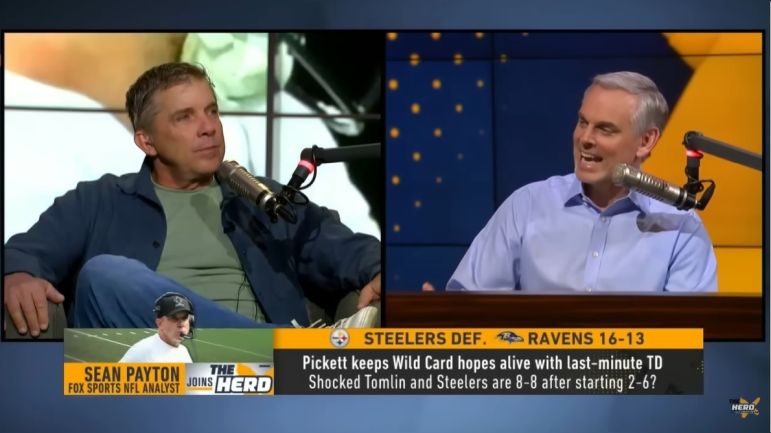 The New Orleans Saints had the chance to draft Kenny Pickett in the first round ahead of the Pittsburgh Steelers this year. They passed, choosing WR Chris Olave and OT Trevor Penning instead. But had Sean Payton not stepped down from his post as the team’s head coach, there’s a good chance Pickett would be in New Orleans right now, not Pittsburgh.

Appearing on The Herd with Colin Cowherd yesterday, Payton evaluated and praised what he’s seeing from Pickett.

“I see football intelligence,” Payton said. “I see someone who processes quickly. He certainly has it. When we try to find those intangibles with his teammates, you can tell, you can watch a quarter of a game and you can tell his teammates think he has it. You could see Mike Tomlin when he came off that play like, Kenny F’n Pickett.”

Pickett has come up clutch in gotta-have-it situations the last two games, leading game-winning drives to beat the Las Vegas Raiders on Christmas Eve and again to knock off the Baltimore Ravens Sunday night. Both primetime games, big stages, with the Steelers’ season on the line. Defining “it” is difficult to do but it’s a trait that reveals itself in moments like those ones. And Pickett passed both of those tests.

His seasonal numbers still look ugly. Six touchdowns, nine interceptions, and the Steelers’ offense still ranks near the bottom of the league. Pittsburgh’s thrown only eleven touchdown passes all season. If that’s where their number stands after Sunday’s game against the Cleveland Browns, it’ll be the fewest touchdown passes by a team since the 2015 St. Louis Rams. But all that matters for Pickett is the type of player he is right now, not what he was to start the year, and he’s clearly headed in the right direction and playing his best football when the Steelers have needed him to the most.

Payton also pointed out the Steelers’ proximity to Pickett allowed them to know the person better than any other club evaluating him.

“When you share a building, which is unique, the Steelers and the University of Pittsburgh and you have that much access to personality, skillset, all the other intangibles, that’s invaluable.”

Pickett being literally right next door is one reason the Steelers said they drafted him. Though it’s a word he doesn’t often use, Tomlin cited the “comfort” in knowing Pickett the person and the player in making him the 20th overall selection and first quarterback off the board. Pickett’s leadership has shined through on a young offense figuring out who they are and what they have. Now, it looks like they have something in Pickett who will enter 2023 as the team’s unquestioned starter.

Payton noted unlike a top-five pick, the Steelers were able to be a bit more patient with Pickett, too.

“But they weren’t forced to start or play him this year. They arrived at him. Where we see so many teams that take someone so early you have to play them. Kyle Shanahan in San Francisco.”

To a degree that’s true and the Steelers went into the season with Pickett as the backup behind veteran Mitch Trubisky. But after a lackluster start to the season that saw the team losing to the New York Jets at halftime, Tomlin made the switch to Pickett, a decision that came swifter than most anticipated. But Pickett was more developed than a lot of early-round quarterbacks, like Trey Lance in San Francisco, and he’s answered the call. To Pittsburgh, to the NFL, and to Sean Payton, who will probably be in the league coaching against him next year.