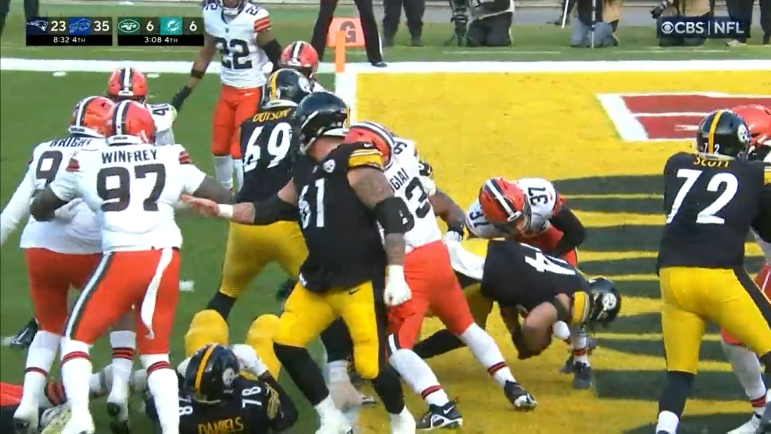 You’ve probably heard a lot less complaining about Pittsburgh Steelers fullback Derek Watt’s contract this past season, at least if you’ve steered clear of Charlie Jones. Part of the reason is simply because he’s been given more visible opportunities to earn his keep, so to speak.

A veteran fullback whose primary function throughout his entire seven-year career in the NFL has been to play special teams, Watt saw a career-high 14 offensive touches for the Steelers in 2022, which worked out pretty well. He produced nine first downs or touchdowns in the process, recording his second and third touchdowns in his career.

He got the opportunity in the season finale to score on the ground, punching it in from one yard out on the goal line, just the second rushing touchdown of his career and the first since 2019 when he was last with the Los Angeles Chargers. Earlier in the season, he caught a touchdown pass from wide receiver Chase Claypool.

But he’s become most known for his short-yardage carries. He carried the ball nine times this season. All of them until Sunday were on 3rd and 1 exactly, which his one-yard touchdown coming on 1st and goal from the one. He was successful on eight of his nine carries.

“Give the ball to Derek and it’s gonna be a touchdown”, former Pittsburgh Steelers quarterback Ben Roethlisberger said of the middle Watt brother on his Footbahlin podcast. “I mean, I don’t know what his percentage was on 3rd and 4th and short, but it had to be high. Give the man the ball”.

Watt had among the highest conversion rates among non-quarterbacks on 3rd and short in the NFL this past season. It began to become such a fixture that it felt surprising when one of his fullback dive rushes on 3rd and 1 was finally stopped short of the first-down marker.

The truth is that Watt actually logged fewer snaps on offense in 2022 than he did in 2021, which really speaks to perception bias. Most I would guess likely assume that he played more this past season based on the fact that he got numerous touches over the course of the year.

But the reality has always been that his primary contributions lay elsewhere. That’s why I worded my opening paragraph carefully, talking about his visible opportunities to contribute and earn his paycheck. Because whether he touched the ball once or not, he had still all along been doing what the Steelers have paid him to do.

Now, of course, he is due to be a free agent this offseason. Would the Steelers pay him over $3 million per season again? I don’t know, but I suppose we’ll find out. I doubt Derek has much interest in moving his young family out of the area at this point, unless perhaps the Packers want to sign him and he can move back to Wisconsin.