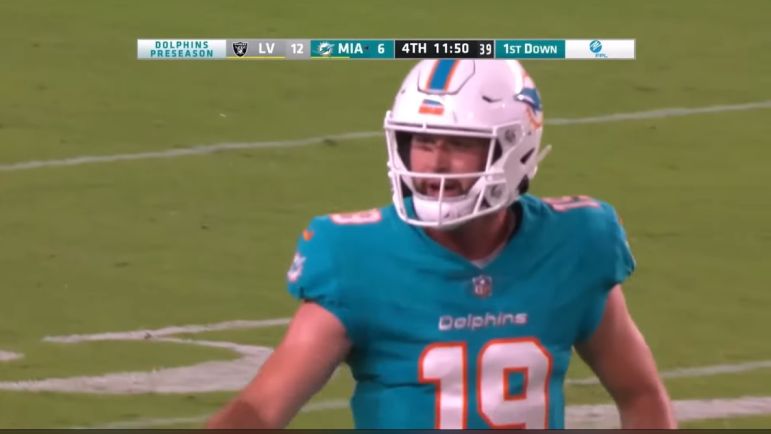 The stars are aligning for the Pittsburgh Steelers to make the playoffs. After getting all the help they needed over the weekend, including beating the Baltimore Ravens Sunday night, they’re in a good position to have everything break their way again in Week 18. In addition to needing to beat the Cleveland Browns, the Steelers also need the Miami Dolphins and New England Patriots to not win. The Dolphins, fading after a hot start, appear to be putting their playoff hopes in third-string QB Skylar Thompson’s hands.

According to Dolphins’ head coach Mike McDaniel, the team is preparing as if Thompson will start the week. Starter Tua Tagovailoa remains in concussion protocol while backup Teddy Bridgewater broke his finger in yesterday’s loss to the New England Patriots. McDaniel isn’t ruling Bridgewater out but told reporters Monday that Thompson is currently the team’s starter. Here’s what he said via ESPN’s Adam Schefter.

Dolphins’ HC Mike McDaniel told reporters that Tua Tagovailoa is not a part of the team’s QB plans for Sunday’s game vs. the Jets. Skylar Thompson and Teddy Bridgewater are.

McDaniel also did not officially rule out Tagovailoa but he’ll have to work through protocol to even have a chance to play.

McDaniel then clarified that he cannot rule out Tua for Sunday because discussing "anything but what we're doing that day" makes "his recovery worse as a human being. No timeline has been discussed." https://t.co/wIm02ccZOa

Still, it looks pretty unlikely Tagovailoa will suit up this weekend. And with Bridgewater’s broken digit, Thompson is the favorite to play in Week 18. A 7th-round rookie out of Kansas State, he’s appeared in six games this season. Thompson’s made one start, a 24-16 loss to the Minnesota Vikings in Week 6 while he played out the rest of yesterday’s game versus New England. He finished Sunday going 12/21 for 101 yards, one touchdown, and one interception. The numbers don’t look pretty and Thompson’s play wasn’t great but he was also hurt by drops, one of which led to his interception.

After Thanksgiving, the Dolphins were riding high at 8-3. But they’ve lost five in a row and have gone from AFC powerhouse to just trying to make the playoffs.

For Pittsburgh, they need Miami to lose (or tie). They need the same result for the New England Patriots, Week 18 underdogs to the Buffalo Bills. Both those scenarios are plausible, if not likely, meaning if the Steelers can beat the Cleveland Browns next week, they’ll make the playoffs as the 7th seed.

As the old saying goes, it’s not how you start but how you finish. The Dolphins are limping to the finish line while the Steelers are finding their stride.