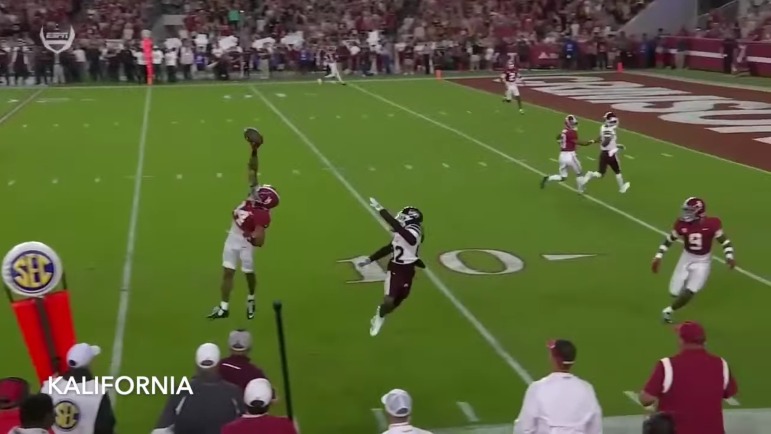 Yesterday, CBS Sports’ Ryan Wilson released his seventh 2023 mock draft, and with the 17th overall pick, the analyst had the Steelers selecting University of Alabama defensive back Brian Branch.

The Branch selection is a change from Wilson’s mock that he released last week which had Pittsburgh selecting Devon Witherspoon from the University of Illinois. In this one, the Steelers take Branch at No. 17 while Witherspoon is the next pick off the board at No. 18 to the Detroit Lions.

“Branch isn’t the first name you hear about when the conversation turns to Alabama’s defense, but maybe he should be. He’s a sure tackler, can blitz off the edge, and is solid in coverage, and if Nick Saban trusts him, that’s all you need to know about his NFL prospects,” Wilson wrote about Branch.

It’s noteworthy that CBS has Branch listed as a cornerback. He played mostly safety at Alabama, but he’s capable of playing nickel and has excelled as a hybrid safety/linebacker playing closer to the line of scrimmage with the Crimson Tide.

Alabama’s Brian Branch crashes down from the slot and gets off the block of a pulling offensive guard to make a stop in the run game.

His versatility and run defense will certainly be something that intrigues the Steelers brass, and with safeties Damontae Kazee and Terell Edmunds due to hit free agency, maybe the Steelers see Branch as a do-it-all replacement at the position.

If the Steelers are going to draft Branch, I doubt it will be as a cornerback. He was pretty limited in man coverage at Alabama and most of his looks at the position came as the nickel corner. He would fit more as a versatile safety if the Steelers aren’t able to bring back Edmunds and/or Kazee.

Branch was a highly productive player at Alabama, with 172 total tackles and four career sacks, three of which came in his junior year this past season. It was by far Branch’s most productive season as he racked up 90 total tackles, 14 tackles for a loss, three sacks and two interceptions. He also had seven pass deflections.

While he may not be a full-time corner if he were to end up in Pittsburgh, his versatility is certainly intriguing. He played the same Star position that current Steelers safety Minkah Fitzpatrick did as a safety/cornerback at Alabama, and while Fitzpatrick has blossomed as a safety in the NFL, the Steelers could use Branch in the slot while using Fitzpatrick more as a true safety. Adding him to the Pittsburgh defense would give the unit a ton of versatility and the ability to throw a lot of different looks at opposing defenses, which would certainly be a plus.

It’s obviously very early in the process, and without knowing what the Steelers do in free agency, it’s hard to say exactly where the team’s needs will lie by April. But given the secondary guys they do have entering free agency, it’s realistic to expect that safety might be a position the team addresses in the draft, and if they do, Branch would be a really solid option.