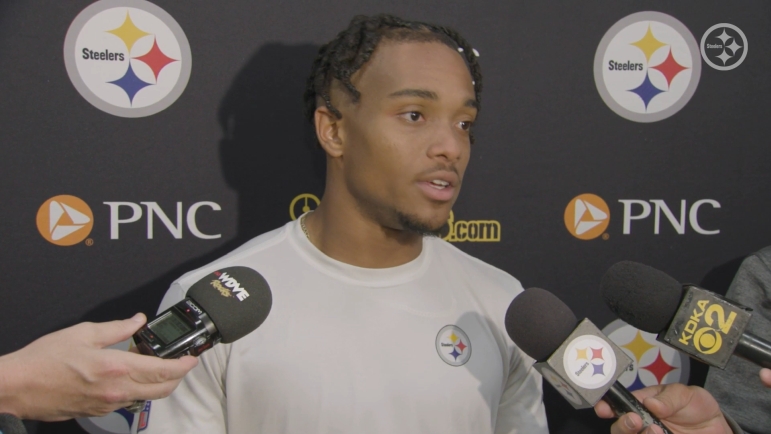 The Pittsburgh Steelers are looking ahead to the 2023 season now—what choice do they have, considering their 2022 season has been over for more than a week—and that includes considerations of how to construct their offseason roster.

Having secured their quarterback in last year’s draft, the next step offensively must be to surround him with the weapons he needs. While the Steelers have wide receivers George Pickens and Diontae Johnson, they do not have an established third. 2022 fourth-round draft pick Calvin Austin III hopes to be that guy.

A Memphis product, the undersized speedster suffered a foot injury in the practice before Pittsburgh’s first preseason game. He would never play a snap inside an NFL stadium as a rookie, spending the season on the Reserve/Injured List. He returned to practice after a number of weeks, but had a setback and subsequently had surgery. But he’s mentally ready for 2023, and getting there physically.

“When I went back out there I was definitely impressed with myself”, he told Ray Fittipaldo of the Pittsburgh Post-Gazette after the Steelers’ season ended, about returning to practice after his initial injury. “I was excited and hoping to help the team. I just had another misstep at practice, and we decided to get it fixed. Rehab is going well and I’m excited for next year”.

The Steelers traded 2020 second-round wide receiver Chase Claypool just before the trade deadline. While that yielded them the 32nd-overall pick in the 2023 NFL Draft, it left a deficit in the room. Steven Sims played most of the lost wide receiver snaps in Claypool’s absence, but he didn’t produce in that role much more than Claypool did with the Chicago Bears—which was very little.

Tight end Pat Freiermuth’s production in his role, increasingly from a slot presence, closes partway the gap opened with the trade, but the Steelers know that they need to find another wide receiver that they can count on.

They can’t count on Austin being that guy during the offseason. They have to add, whether via free agency or the draft or both, while still hoping that he can be the player that they believed him to be when they drafted him.

The first step in finding out is getting him healthy, and from his own mouth, he is on the right track. He had surgery in October, so the hope is that he should have little trouble participating in offseason activities.

Austin caught 137 passes for 2,202 yards and 19 touchdowns in 23 games over his final two collegiate seasons at Memphis. He timed in the low 4.3s in the 40-yard dash when he ran at the Combine. In spite of his short stature, the Steelers viewed him as inside-outside-capable because of his speed and elusiveness. He’ll have the opportunity to prove it later this year.