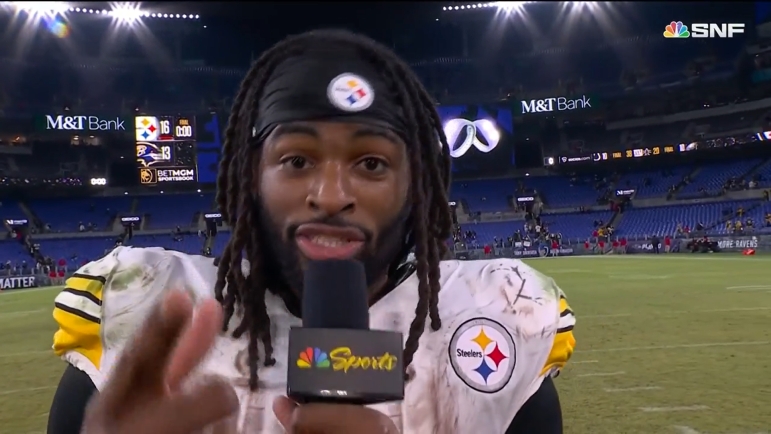 There is unquestionably a part of former Pittsburgh Steelers quarterback Ben Roethlisberger that misses the game and wishes that he was still playing, or could still play. And a big component of that is the guys that he could be playing with.

The team drafted running back Najee Harris and tight end Pat Freiermuth in the first two rounds of the 2021 NFL Draft, so he got to play with them last season. He’s already said very clearly that he regrets not having had the opportunity to play more with Freiermuth. I’m sure he feels the exact same way about Harris, whose praises he’s been singing in recent weeks.

“For whatever reason, that dude has been running like a big dog just like we know he is, like he can”, he said of the second-year back on yesterday’s episode of his Footbahlin podcast. “He has been running people over. Just playing almost possessed. Like, maybe he’s saying, ‘Hey, if we want to make it, I’ve got to do this’. I don’t know what it is, but he is playing lights out right now”.

Harris recording his first 100-yard rushing game of the 2022 season in Sunday’s win against the Baltimore Ravens, and he also caught the game-winning touchdown with under a minute to play, showing great awareness and good hands.

It probably reminds Roethlisberger of playing with Le’Veon Bell, a guy who could seemingly do it all when he was on the field. But while he didn’t say it, or even suggest it, he seems to see more off the field from Harris, as he addressed the back directly.

“Naj, awesome. Keep it up. Don’t stop”, he told his former teammate (who he said he’s sure doesn’t actually watch the show). “You are leading your team as a captain and doing what you’re supposed to be doing, and it’s fun to watch”.

Harris is around 50 yards shy of his second consecutive 1000-yard rushing season. If he hits the mark in the finale, he will be the first player in team history to rush for at least 1000 yards in each of his first two seasons. Jerome Bettis technically did it in his first two years in Pittsburgh, but he was a fourth-year veteran by then.

This is, again, something he did not explicitly reference, but Roethlisberger seemed to see in Harris’ 2022 season something similar to the Steelers’ own 2016 campaign. As the pass game fizzled, they had to rely on Bell.

The All-Pro recorded 161 carries over the final six games of the season, rushing for 835 yards with six touchdowns. He added another 256 receiving yards and a touchdown on 30 receptions. And they went 6-0 in those games, helping to secure a playoff spot.

“The way he’s running the ball, he’s put the team on his back”, Roethlisberger said of Harris, who has been the focal point of the offense since the bye week, though not to the same extent as Bell was—largely because of the help of Jaylen Warren, but that’s another topic, which we’ll get to as well.