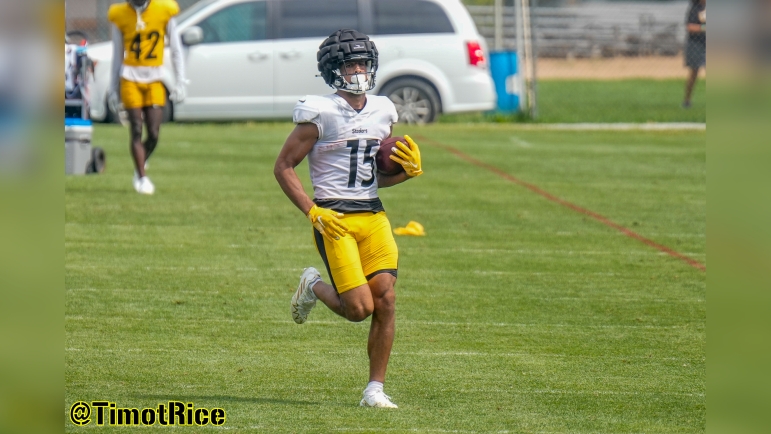 As we’ve done in previous years, we’re taking a look at those Pittsburgh Steelers under futures contracts for the 2023 offseason. The ones who spent most if not the entire year on the practice squad and what we can expect from them during training camp (hopefully) into the regular season.

White is sort of a modern day Walter Young. The practice squad lifer. In today’s quicker world of roster churn, you either make it or you don’t, White has stuck around on the Steelers’ roster as the football equivalent of a AAAA player. Since signing with the Steelers in 2020, he’s caught just six passes and this past year, appeared in only one NFL game, playing ten offensive snaps and catching one pass.

White does a little bit of everything even if he doesn’t do one thing all that well. His size makes him an attractive blocker in heavy personnel. He can play any spot on the field as a wide receiver, inside or out, and he has baseline special teams value to run down kicks and punts. As we always say, there’s value in versatility and White has that in spades. Still, he doesn’t have a defined role or fit or anything he does head and shoulders above the rest. The only thing unique about him is that his dad, Sheldon, was hired to be part of the Steelers’ front office this past offseason.

This summer, White began training camp working with the first-team. But George Pickens quickly started doing George Pickens-like things and White was shuttled towards the back of the pack by camp’s end. Here’s a snippet of how we summed up his performance.

“But beyond good hands and versatility, he can play any spot in the lineup, he lacks many defining traits. He’s stiff, doesn’t create much separation, and doesn’t have any sort of long speed. At best, he’ll be a receiver on the back-end of the roster, offering a bit on special teams but he’s not a core guy or a particularly good gunner. His size helps him as a blocker on the kick return team but he’s a jack-of-all-trades that’s difficult to get all that excited about.”

Frankly, a lot of the same stuff we’re talking about right now. White avoided being part of the roster churn, he didn’t bounce on and off the practice squad, but he was only elevated once and spent nearly the entire season on scout team, working in practice, but not being part of the Sunday gameplan. Over his career, he has just six receptions for 35 yards and despite Pittsburgh having depth issues at receiver this year, White never got a shot. Miles Boykin is the filet mignon version of White and had the hat all year as the team’s blocker/gunner type.

There’s nothing to suggest White’s game or status or role with the team will change this upcoming summer. His futures contract will probably carry him through camp but it’ll be another uphill battle to make the 53-man roster. At some point, his practice squad meter will run out with the chance for the Steelers to add someone younger with a better skillset. 2023 could be that year. There aren’t many guys who sit on a practice squad for years at a time and White may have reached his limit.