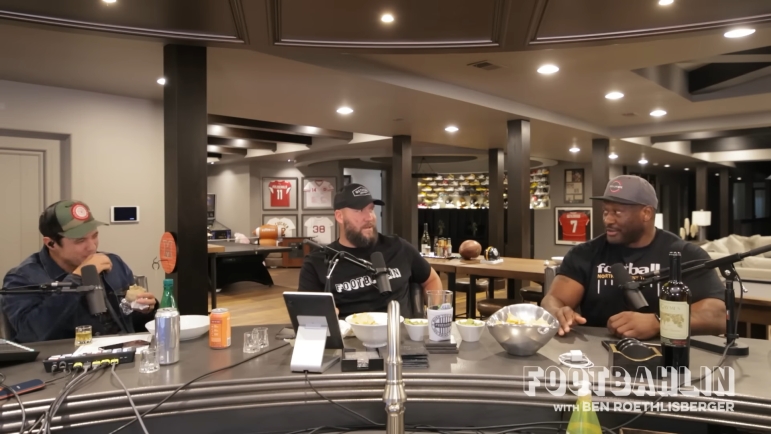 Remember that time former Pittsburgh Steelers outside linebacker James Harrison was targeted in a game? Unless you’re insane like me, then you probably don’t, and you’ll have a hard time even finding it because he wasn’t—officially or unofficially—credited with a target on the play. But it did happen back in Week 10 of the 2014 season.

The Steelers were playing the New York Jets, and they actually did have a real package for Harrison at the goal line, lined up as a fullback. But at least according to the eventual official story, the time he got the ball thrown to him was never supposed to happen. Yet hearing him and his quarterback, Ben Roethlisberger, bring it up on the last Footbahlin podcast, I’m not so sure.

“I went in on one play where the quarterback was supposed to throw the ball to me and he didn’t. Who was it?” Harrison ribbed Roethlisberger, who shot back by asking him if that was the play they ran in practice where he dropped the ball so he didn’t trust it.

Harrison’s recollection is fairly good. It was technically a defensive holding penalty, but a roughing the passer penalty on the same play was accepted instead. And the play (though an unofficial play) is credited as targeting tight end Heath Miller instead of Harrison. But I dug it up and cut it out for you to see below in all its glory. It was Harrison being targeted.

And it wasn’t the greatest pass in the world. But Harrison didn’t have the best reaction in the world, either. Roethlisberger tried to throw him open a bit, allow him to use his size to box out the defender, but Harrison was coming inside and expecting the ball to come that way. That allowed the defender to make a play on the ball, though a little too emphatically for the officials’ taste.

Harrison stayed in the game for the next play to serve as a fullback, throwing a pretty solid block for LeGarrette Blount, who did not follow his block and was stopped short. Then he lost several yards working backward on the next play. The Steelers lost. It was not a good day.

But later reports suggested that sending Harrison out on that play was a mistake and that it was supposed to be designed for fullback Will Johnson. Maybe that’s true. But it’s also clearly true that they did have a package for Harrison as a fullback, and according to Roethlisberger’s own account, they did have a play in the playbook that they ran in practice that targeted him.

It didn’t work out very well, but at least we have this story out of it.