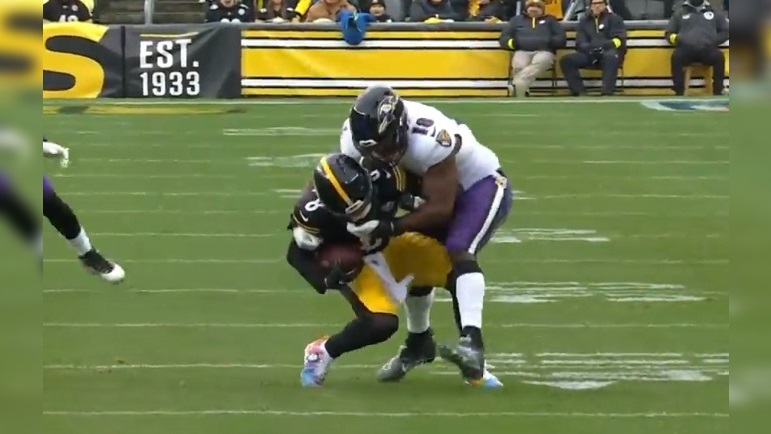 Credit to the Baltimore Ravens for a classic and hard-fought win over the Pittsburgh Steelers’ Sunday. 215 yards on the ground, forcing three turnovers, they deserved to win that game. But Kenny Pickett’s absence certainly changed the game and the play he was injured on very likely should’ve been a penalty.

Here’s a clip of the moment. After escaping one defender, Pickett was pulled down by linebacker Roquan Smith.

There was no penalty on the play. Some would argue this constitutes roughing the passer, throwing Pickett down. But even putting that aside, it appears Smith smacked and then grabbed Pickett’s facemask, which should’ve been a 15-yard penalty and fresh set of downs.

According to the NFL rulebook, this seems to meet the requirement to draw a flag.

“No player shall grasp and control, twist, turn, push, or pull the facemask of an opponent in any direction.

While Smith’s actions don’t seem egregious, grabbing the facemask isn’t the sole reason why he was able to tackle Pickett, he does not immediately release his hand from it and that should draw a foul.

Had it been called, it would’ve been a 15-yard penalty and a first down for Pittsburgh’s offense. Pickett was checked for a concussion after this play, initially cleared, and then taken back out of the game and put in the concussion protocol. Mitch Trubisky finished the game, throwing three interceptions.

Pickett will try to clear protocol in time for Sunday’s game against the Carolina Panthers. We’ll wait and see if Smith is fined for any of his actions here. That news should be known come Saturday afternoon.