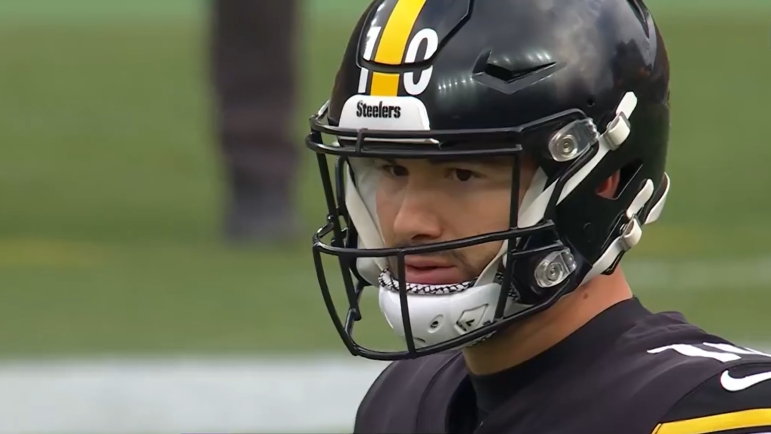 The Pittsburgh Steelers suffered one of their more heartbreaking losses of the season to the Baltimore Ravens. As such, they now move to 5-8, all but taking themselves out of the playoff picture. Quarterback Mitchell Trubisky, who started the first four games of the season, had to step in for the injured Kenny Pickett. After the game, he was asked about the team’s playoff hopes, erroring on the side of optimism according to the team’s YouTube channel.

“There’s always hope,” Trubisky said when asked about the Steelers’ playoff hopes. “We just take it one day at a time and continue to take care of business. We had a huge opportunity today, we know that. But we put our heads down and get back to work. We got a great group of guys, with some leaders emerging. We just have to put our heads down and work and get one next week.”

Realistically, the Steelers have next to no chance of making the playoffs. Indeed, the New York Times playoff simulator has their chances under 1% after the loss, compared to 4% before. In order to make it, they have to win out, and get a lot of help from other teams. For more perspective, even if the Steelers win out, their playoff chances still hover around 5%. The team plays the Ravens again in Baltimore as well as the Browns with quarterback Deshaun Watson.

The Steelers often shot themselves in the foot, turning the ball over three times in promising drives and missing a field goal. Trubisky played like a true gunslinger, living and dying by risky throws. While he had his fair share of big plays, his risk taking ultimately cost the team the game.

Trubisky may wind up starting next week against the Carolina Panthers, as the timeline on Pickett’s concussion is unknown. On one hand, Trubisky has the most experience with the first team offense, as he was the team’s first team quarterback in training camp. On the other, his play style proved costly, as he threw three more interceptions than Pickett had in the past four games.

For the Steelers, the playoff picture does not look good, nor does head coach Mike Tomlin’s streak of having no losing seasons. Sitting at 5-8, only a few borderline miraculous scenarios see them making the playoffs. While this is a transition season, it is tough to lose a game the way that they did, especially to their biggest rival.