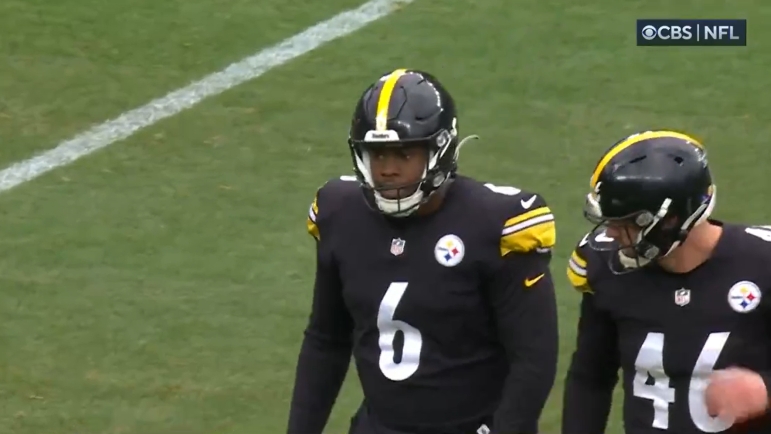 Entering Sunday’s AFC North rivalry matchup against the Baltimore Ravens, everyone within the facility for the Pittsburgh Steelers knew how important the field position game would be in what was likely to be a low-scoring affair.

Turns out, that’s exactly what it was as the Ravens emerged victorious, 16-14.

While the Ravens were able to run the football at will down the stretch against a soft Steelers front, and a major reason the Steelers lost the game was due to two costly interceptions in scoring position by backup quarterback Mitch Trubisky, who was in the game for an injured Kenny Pickett, the inability to win the field position battle was significant for Steelers head coach Mike Tomlin.

Speaking with reporters Tuesday during his weekly press conference, Tomlin highlighted some special teams issues — particularly in the punting game — that led to the loss in the field position battle and ultimately played a role in the two-point loss.

Second-year punter Pressley Harvin III had arguably the worst game of his career. He had a 17-yard punt in the first quarter, followed that up with a bad touchback on a punt from inside Baltimore territory, and was largely ineffective throughout the matchup. Add in the holding call on the Steelers on a Baltimore punt that turned it into a 56-yard yet for the Ravens and it was clear that the Steelers were really poor in the field position battle.

“I thought the field positioning component of the special teams was significant. The 17-yard punt is low hanging fruit, but when I look at the totality of the punting game, we had a touchback, and you can’t have touch backs when you’re trying to play the long field game,” Tomlin stated to reporters Tuesday, according to video via the Steelers official YouTube page. “We had a holding call on a punt return that that gave them a 56-yard net on one punt in the second half, for example. The totality of those things in a close ball game leans the field toward [Justin] Tucker and away from [Chris] Boswell.

“And when these two teams come together, oftentimes it comes down to Tucker and Boswell.”

The 17-yard punt was downright awful and was a microcosm of the season Harvin is having. He has a big leg and can really boom punts, but his consistency is an absolute mess. He can’t stay out of his own way and is hurting the team in the process.

The same thing occurred on the touchback punt in the first half. The Steelers opted to play the long field game, leaning on Harvin to do his job. instead, he outkicked his coverage and bounced the punt into the end zone, leading to a 28-yard net punt.

Ultimately, the game came down to Tucker and Boswell in the end, and the Ravens came through by blocking Boswell’s 40-yard field goal attempt thanks to Calais Campbell. Take away one of the two turnovers in scoring position from Trubisky as well and it’s likely the Steelers — at minimum — squeak out a one-point win.

Instead, the Steelers lost in all four phases, dropping to 5-8 on the season, all but ending the season in frustrating fashion.