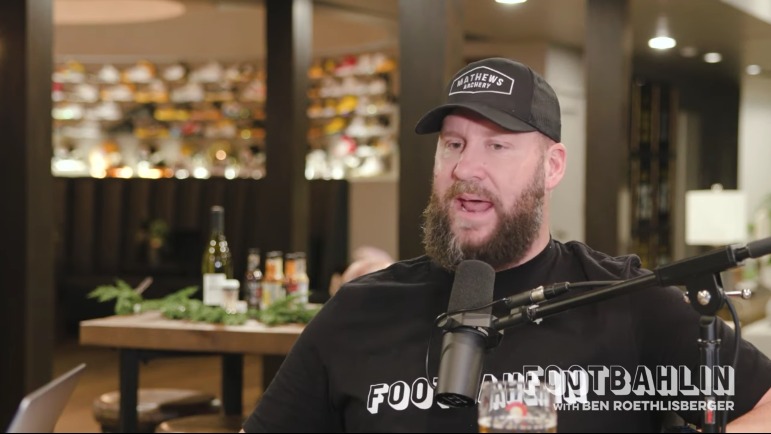 The Pittsburgh Steelers had their first matchup against the Baltimore Ravens in the 2022 season, and it was also their first matchup against Baltimore without longtime quarterback Ben Roethlisberger since the 2019 season. Roethlisberger had plenty of highlight reel moments during the rivalry, which usually is defined by close, hard-fought, defensive-minded battles, but in Week 9 of the 2014 season, Roethlisberger tossed six touchdown passes to go along with 340 yards in a 43-23 blowout win for the Steelers over the Ravens. On episode 16 of his Footbahlin’ podcast, Roethlisberger talked about how much it fun was to dominate Baltimore.

“I had a game, I don’t remember what year it was, where I threw six touchdowns,” Roethlisberger said. “That kind of lopsidedness just didn’t happen. So when it did happen in that game it was like, ‘oh man this is so much fun.’”

The Week 9 game against the Ravens was actually the second straight week Roethlisberger had thrown for six touchdown passes, as the week before he had one of the best games of his storied career, throwing for 522 yards and six touchdowns in a 51-34 win over the Indianapolis Colts. That two-week stretch is probably the best two-game stretch of Roethlisberger’s career, and to cap it off with a blowout win over the Ravens had to be incredibly sweet.

Happy Ravens Week Throwback: That time in 2014 when Ben Roethlisberger threw six touchdowns against the Ravens. He was 25 of 37 for 340 yards and 6 TDs for a rating of 136.3. The Steelers beat the Ravens 43-23. @_BigBen7 #Steelers #NFL #HereWeGo pic.twitter.com/qAQVcX5iYh

Roethlisberger brought that game up in the context of how close the rivalry is record-wise and how close the two teams are in points scored. Since 2008, the 21-point margin of victory is the second-largest in any Steelers-Ravens game, behind a 35-7 Ravens win in 2011. While there’s been a few blowouts mixed in, for the most part when the Steelers and Ravens play, the game is going to go down the wire and both defenses are usually going to play at a high level. That’s what makes Roethlisberger’s six-touchdown game that much more impressive. He did it against a team that knew him better than probably any other opponent in the league, but he was still able to torch them, especially during a week where they were probably keying on him a little bit extra due to his six-touchdown performance the prior week.

As impressive as the six-touchdown performance was, my favorite Roethlisberger vs. Ravens performance took place in 2010 when an 8-3 Steelers team and an 8-3 Ravens team faced off in Baltimore on Sunday Night Football. It was a typical defense battle, but on the eventual game-winning drive, Roethlisberger escaped from a near-sack against Terrell Suggs and threw the ball away to preserve Pittsburgh’s field position at the Baltimore 10-yard line. (you can find it at the 1:57:08 mark on this video). Two plays later, he hit running back Isaac Redman for what ended up being the game-winning touchdown.

To me, it’s the most Ben Roethlisberger play of all time. Somehow evading the pressure, avoiding disaster, fighting to live another down and eventually capping it off with the game-winning touchdown. For the game, Roethlisberger was 22-38 for 253 yards with a touchdown and an interception. Not nearly as impressive as his six-touchdown performance, but a game that defines Roethlisberger’s grittiness throughout his career.