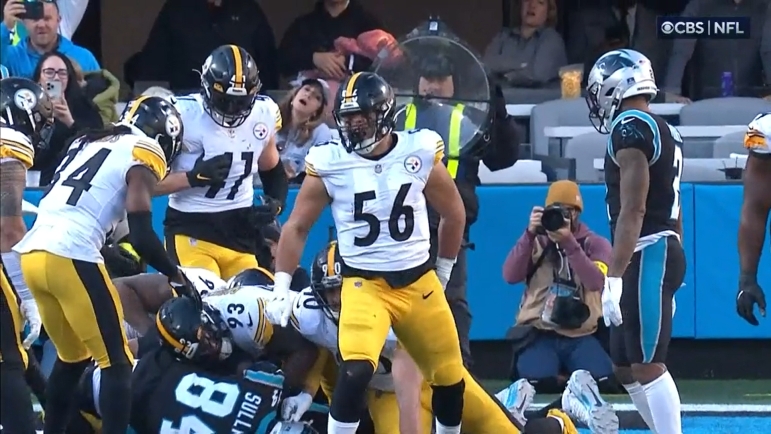 The Pittsburgh Steelers won on the road in Charlotte against the Carolina Panthers on Sunday, moving to 6-8 on the season after beating Carolina 24-16. The defense came up big in this game after getting run over by the Baltimore Ravens last week, surrendering just 21 rushing yards to a Panthers team that had previously been steamrolling their opponents the last several weeks on the ground.

It was a statement game for the defense who was under the microscope after getting gashed last week. However, this game had more meaning behind it as it meant a lot for both OLB Alex Highsmith and DL Larry Ogunjobi given the two have such strong roots to the Carolina area. Highsmith was born and raised in Wilmington, NC and would later walk at UNC Charlotte where he would play his college ball before getting drafted by the Steelers in the third round of the 2020 NFL Draft. Ogunjobi originally was born in New Jersey after his parents immigrated from Nigeria, but ended up settling in Jamestown, North Carolina where he would play his high school ball and later go on to play for Charlotte.

Both Charlotte products – Alex Highsmith and Larry Ogunjobi – greeted with: “very nice homecoming” as they came off the field. pic.twitter.com/2G5QA7h0p5

Both defenders rose to occasion as the wanted to put on a show for their family and friends in attendance. Ogunjobi literally got after it from the first defensive snap, shooting the gap between the RG and RT and make a TFL on #33 D’Onta Foreman in the backfield to set Carolina behind the sticks.

Ogunjobi finished with five total tackles (three solo), two TFLs, and a QB hit on 31 defensive snaps. He gets his second TFL a little bit later in the first quarter on Foreman again, working down the LOS on RT #72 Taylor Moton and manages to shed the block and make the stop behind the line.

Highsmith came into the game already boasting ten sacks on the season but managed to up that total to 11 in the place that he called home for several years. On this rep, we see Highsmith whip LT Ikem Ekwonu with his signature wicked inside spin move, putting the OL into a spin cycle as he clears the block and tracts down #14 Sam Darnold for the sack.

Later in the fourth quarter as the Panthers are driving down the field and are knocking on the door at the goal line, Highsmith comes up with another big play. The Panthers line up with a run-heavy look as Foreman takes the handoff up the middle, but Highsmith blows past the down block attempt of the TE at the end of the LOS, flying into the backfield and slams Foreman to the ground on contact, knocking the ball out in the process which Carolina recovers, but pushes them back a yard as Pittsburgh forces third down.

Here is another view of the play, showing Highsmith’s closing speed on the football and the obvious emotion he feels after making the play in-front of plenty of his people in attendance.

While neither Highsmith nor Ogunjobi was credited on the play, both men made an impact on this sack of Darnold that was split between T.J. Watt and Cam Heyward. Highsmith affects the play from the snap of the ball, whopping Ekwonu again on the inside spin to force Darnold to bail out of the pocket. This causes Darnold to take his eyes from downfield as he attempts to find space to throw, giving Watt, Heyward, and Ogunjobi time to converge on the QB and sandwich him in the backfield. While you can’t technically split a sack three ways, Ogunjobi deserves some credit as he gets to Darnold at the same time and helps bring him down.

Just a couple of weeks ago, the Heyward brothers had quite the homecoming in Atlanta as Cam recorded a sack and Connor scored his first NFL touchdown. This week, both Highsmith and Ogunjobi enjoyed strong performances, showing out for a rejuvenated defense that got after Darnold to the tune of four sacks and six QB hits while also stifling a red-hot Panthers running game.

Mike Tomlin would call it “football justice” for both Highsmith and Ogunjobi to play the way they did in Carolina against the Panthers. Highsmith has set himself up to earn the bag from Pittsburgh this offseason should they prioritize signing him to an extension as he has become the ideal running mate across from Watt on the edge. Ogunjobi’s future in Pittsburgh is a little more uncertain as he is a free agent after the season and hasn’t exactly lived up to expectations in 2022. Regardless, both players can rest easy knowing that they put their best foot forward in their homecoming back to Carolina and that their respective performances were a big reason the Steelers were able to get the win.

What are your thoughts on Alex Highsmith and Larry Ogunjobi’s performances against the Panthers? Do you think both represented themselves well in their return to Carolina? Please leave your thoughts in the comments section below and thanks again for reading!