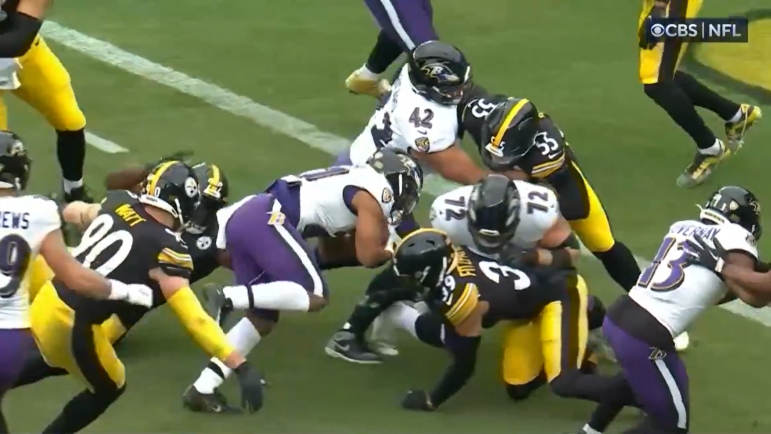 It was a frustrating sight to see on Sunday inside Acrisure Stadium: the Baltimore Ravens offense, with recently activated running back J.K. Dobbins — who missed much of the season — running right through the heart of the Pittsburgh Steelers defense over and over — and over — again.

Even when everyone in the Tri-state area, maybe the country, knew what the Ravens were going to do with backup undrafted free agent quarterback Anthony Brown in the game due to an injury to Tyler Huntley, the Steelers defense couldn’t get a stop.  Allowing the Ravens to run out the clock and pick up a win that didn’t feel as close as the final score, based on the way the Ravens punched the Steelers in the mouth throughout the contest.

After the game, in which the Ravens ran for 215 yards and a score on 42 carries (5.1 yards per carry), star outside linebacker T.J. Watt, who has been playing with a rib injury the last two weeks, seemed rather frustrated overall with the defense’s performance, stating that it wasn’t about being worn down or being out on the field too much after multiple turnovers offensively that led to the Ravens success on the ground. Instead, it was a lack of execution on the Steelers’ part, which has become a common theme against the run at times this season.

“They run a good offense. We just need to do a better job of being assignment sound and making plays when it matters the most,” Watt stated to reporters Sunday after the loss, according to video via the Steelers official YouTube page.

Down the stretch, with Brown in the game for the Ravens, Baltimore ran the ball 14 times out of 20 plays late in the third quarter and early in the fourth — not including kneel downs. At one point, the Ravens ran the football nine straight times, which resulted in a 30-yard Justin Tucker field goal to make it a 16-10 game and then later sealed the win with the game-clinching third-down conversion.

In the end, that stretch of offense from the Ravens was rather demoralizing for the black and gold, who had no shot at slowing down Baltimore’s run game. On the final drive, the Steelers defense was on the field with a chance to get a stop and potentially win the game for the Steelers. The highest-paid defense in the NFL couldn’t get the job done, which was frustrating for Watt.

“I mean, it’s football. As a defense, we take the field when we need to, regardless of what the situation is, we need to hold them to as fewer points as we possibly can,” Watt stated, according to video via the Steelers official YouTube page. “I don’t think we got worn down. I think it was just a factor of not executing when we knew — everybody in the stadium knew — what they were gonna do, and that was run the ball.”

That’s what has to be most frustrating for the Steelers defense coming out of the 2-point loss. While they held Baltimore to just 16 points, which should have been good enough to win the game, they couldn’t stop the run at any point in the matchup, especially late when it mattered most.

It’s becoming a bit of a broken record on the year for the Steelers when it comes to the run defense: assignment sound, execute better, make more plays. Less talk, more production in that area. The words are meaningless at this point.