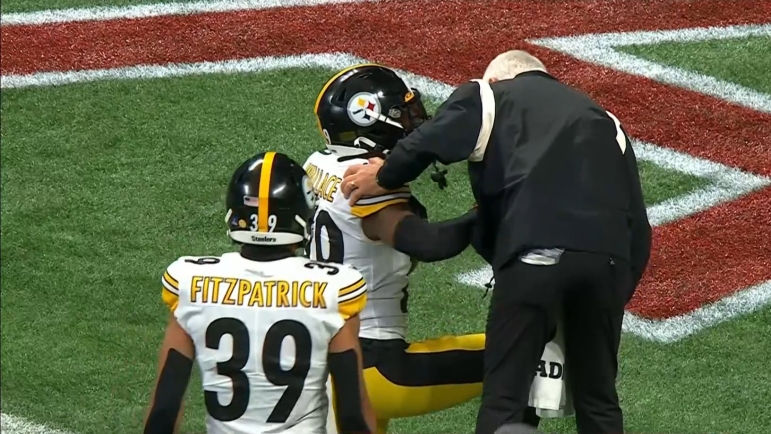 UPDATE: Okorafor has returned to the game

In the third quarter following a 14-yard run by running back Najee Harris, right tackle Chukwuma Okorafor suffered an upper-body injury to his upper arm or shoulder. Okorafor was down after the play and was walked off the field by trainers. He was replaced by Trent Scott. Pittsburgh’s offensive line has generally been healthy all year, and losing Okorafor would definitely be a major loss to the Steelers offensive line. We’ll keep you updated as to his status.

UPDATE: Edmunds has returned to the game.

After bringing down Falcons running back Cordarelle Patterson on the first play of the second half, Pittsburgh Steelers safety Terrell Edmunds appeared to suffer a stomach injury. Edmunds stayed down after the play holding onto his midsection and was treated on the field by trainers. Edmunds left the game but was seen with his helmet on the sidelines. Hopefully, Edmunds should be able to return shortly.

UPDATE: Wallace has returned to the game.

On a near-interception by the Pittsburgh Steelers on 2nd and 13 from the Pittsburgh 25, cornerback Levi Wallace and safety Minkah Fitzpatrick collided and Wallace’s arm got hit. He went down holding his arm and was tended to by trainers on the field. He headed to the blue medical tent after. Wallace has been a really solid corner for the Steelers this season, especially in the past few weeks. Losing him would be a blow to a secondary that’s already down both cornerback Ahkello Witherspoon and cornerback William Jackson III due to injury. Hopefully, Wallace is just shaken up and didn’t suffer a serious injury, but we’ll keep you updated in regard to his status.