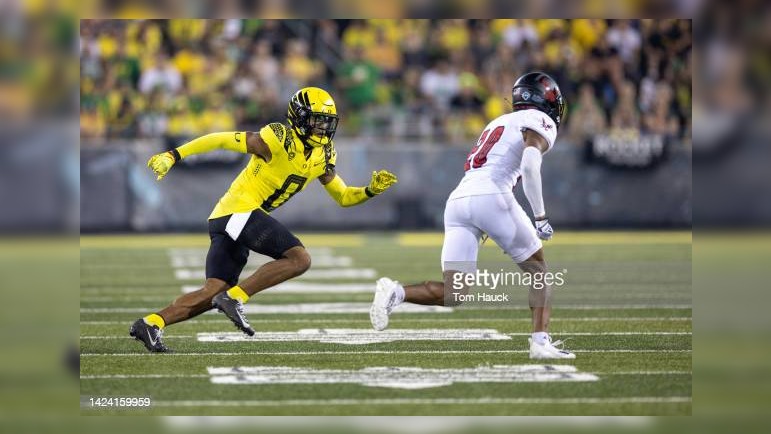 The Pittsburgh Steelers are in unfamiliar territory this season in a number of ways, one of which being their 6-8 record and low playoff odds. After their victory against the Carolina Panthers, they currently hold the 14th overall pick via Tankathon, which would be their highest since they picked quarterback Ben Roethlisberger 11th in 2004. In a Saturday mock draft, Joe Broback of Pro Football Network had the Steelers addressing the defensive backfield with, based on PFN’s own projection, the 13th pick.

“The title of CB1 remains up for grabs,” Broback said. “But Christian Gonzalez could snag it. Just like he’s been doing to passes all year. At 6’2″, 200 pounds, Mike Tomlin and the Steelers are going to love Gonzalez’s potential. He has all of the tools to be a great corner, and he’s joining a system that can help get him there.”

At 6’2″ and 200 pounds, Gonzalez has the measurables to be a quality NFL corner. He is a growingly popular prospect, and was the top corner for a ranked Oregon Ducks team.

According to PFF’s premium stats, he allows a 74.7 passer rating, which ranks 140th in college football among corners with at least 100 snaps. In addition, he played in man coverage 25.6% of the time, which is lower than the Steelers use this season. A redshirt sophomore, Gonzalez has 50 tackles this year with four interceptions (third in the PAC-12) and seven pass deflections. He began his career at Colorado before transferring to the Ducks for the 2022 season, following his coach who also made the switch.

Here’s one of those interceptions against Colorado earlier this year.

Over his three-year college career, Gonzalez has 128 tackles with those four picks and 17 pass deflections. He figures to be one of the highest-rated corners of this draft, battling Georgia’s Kelee Ringo and Penn State’s Joey Porter Jr. to be first off the board.

Having started all twelve games for the Ducks, Gonzalez was recently named to the 2022 AP All-Pac 12 Second Team. He’s also a great tackler as his 4.9% missed tackle rate was the lowest among Oregon starters. While his 40 time isn’t verified, some believe he runs in the 4.3’s and he was a track star in high school, excelling in the 200 meter (though that doesn’t necessarily correlate to a 40 time).

Per PFF, Gonzalez was targeted 64 times in 2022, the most in his team. He allowed 39 catches for 495 yards, intercepting four passes and allowing that 74.7 QB rating against.

The cornerback position is certainly a position of need for Pittsburgh, and arguably the biggest hole in their roster. Arguably the team’s best corner in Cameron Sutton is set to hit free agency, leaving them with a group made up of Ahkello Witherspoon, Levi Wallace, and others. Despite having All-Pro Minkah Fitzpatrick, the team allows the 9th most passing yards in the NFL. The loss of Joe Haden left a big hole at the top corner position, and the team needs to address it.

On the other hand, the Steelers do not have a great history of drafting cornerbacks. Albeit, they have new management in Omar Khan and Andy Weidl. However, there is something to be said about their constant misses on the position in the draft. The team’s only first-round cornerback picked in the 2000s was Artie Burns, who was benched before his rookie contract ended. The team also picked Senquez Golson in the second round in 2014, who did not play a regular season snap for them due to repeated injuries. While this is certainly not to say that any corner the team picks will not pan out, it is important for the new management to evaluate the position better.