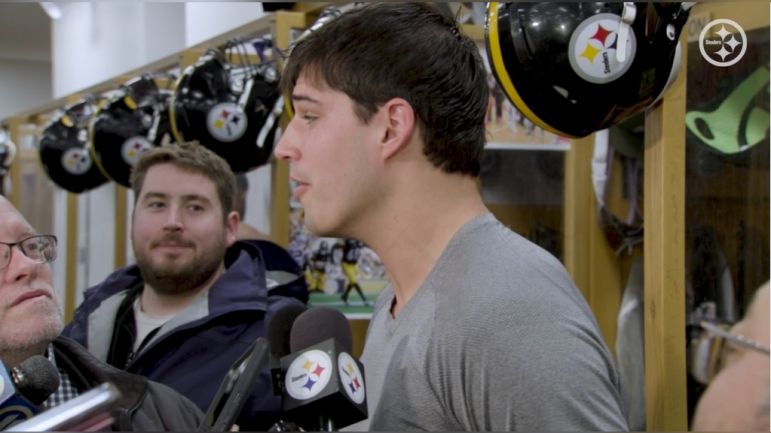 Mason Rudolph doesn’t have a shiny red nose but he’s itching to guide the Pittsburgh Steelers through the final month of December. Picked on and not allowed to play in any games, Rudolph could finally see his shot over the final four weeks. Kenny Pickett’s dealing with a concussion while Mitch Trubisky threw three costly interceptions in relief of him during Sunday’s loss to the Baltimore Ravens.

To date this season, Rudolph has been an extra set of eyes and ears on gameday, a weekly inactive as the team’s #3 quarterback. Speaking to reporters Monday, Rudolph described his current gameday role.

“I got my headset on so I put my coaching hat on some days,” he said via Steelers.com. “But I do a good job. I try to do a good job to help any way I can and communicate. But sometimes less is more.”

Rudolph is the veteran in a QB room that quickly changed during the 2022 off-season. Ben Roethlisberger retired and Dwayne Haskins was killed in a highway accident. Pittsburgh added Mitch Trubisky in free agency and Kenny Pickett in the draft and by the start of the season, both players had passed Rudolph on the depth chart. Now, Rudolph wears a sweatshirt and headset on gameday, helping the other quarterbacks on the sideline as OC Matt Canada works from the booth.

If Pickett doesn’t play this weekend against the Carolina Panthers, Trubisky is still the most likely option to get the nod, still the #2 over Rudolph. But Rudolph would be only one snap away and some would argue he’s the better and safer option, less turnover prone for a team who can’t afford to give the football away. Rudolph doesn’t know his status but is ready if called upon.

Rudolph hasn’t appeared in a game in nearly one year, throwing eight passes in the team’s blowout loss to the Kansas City Chiefs on December 26th in 2021. He completed five of those that day for 35 yards. He made one start in 2021, a 16-16 draw against the Detroit Lions.

Pittsburgh has four games remaining on their schedule: Carolina, Las Vegas, Baltimore, and Cleveland. They’ll need to avoid losses in all of them to avoid Mike Tomlin’s first losing season and the team’s first such one since 2003. We’ll see if Rudolph is part of any of those games or if he’ll remain in his current role of veteran backup.