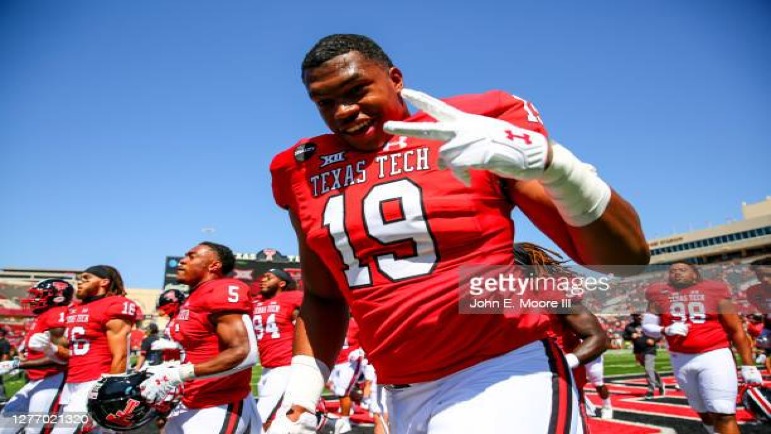 Kent Platte of Pro Football Network put out a no-trade 2023 Mock Draft earlier today, and with the 14th overall pick, Platte had the Pittsburgh Steelers selecting EDGE Tyree Wilson out of Texas Tech. Platte writes that Wilson’s size and athleticism make him a good fit for the Steelers.

“Seeing the Pittsburgh Steelers with a bottom-10 defense feels like finding out your favorite singer uses autotune. It is disappointing but also seems unnecessary — and probably is. There’s a decent chance the Steelers will improve in 2023 simply by developing the players they already have. However, there are defensive areas they can address with their first pick to help catalyze the process. At almost 6’6″ and 275 pounds, Tyree Wilson certainly looks the part of a Steelers defensive lineman. He comes prepackaged with some dangerous athletic traits that have helped him get seven sacks in each of the last two seasons for the Red Raiders. That doesn’t quite encapsulate the type of disruption you can get from Wilson, but it’s a good floor for what he could do in the NFL.”

Wilson came to Texas Tech after two years at in-state rival Texas A&M where he played on the same defense as current Steelers defensive lineman DeMarvin Leal, and his size, range and physicality are all plus traits that Pittsburgh will surely love. He’s not the most athletic guy out there, but he’s physically dominant and for a team that needs help defensively, will surely be someone under consideration.

Going EDGE in the first might be a head-scratching move, but the Steelers need EDGE help beyond T.J. Watt and Alex Highsmith. With Watt going down with a torn pectoral, the lack of EDGE depth was exposed as the Steelers got very little out of Malik Reed and their other cadre of backup EDGE rushers in Jamir Jones and Ryan Anderson. And it wouldn’t be all that unexpected given what Omar Khan said his draft philosophy is:

Pittsburgh hasn’t gotten to the quarterback well this year. They have just 25 sacks, which ranks 25th in the NFL. This isn’t the dominant pass rush that has racked up 50+ sacks every year since 2021. They need pass-rush help, be it in free agency or the draft. Given the current talent they already have, it’s more likely to come through the draft.

I would put pass rush help as a top-three need for the Steelers, along with cornerback and offensive line, particularly at left guard. Despite having Watt and Highsmith, it wouldn’t be surprising to see Pittsburgh spend an early pick on an EDGE. Highsmith going to be due for a new contract as his expires after the 2023 season, so adding an EDGE gives pass rush protection in case he leaves in free agency after the year, while also giving the Steelers additional depth in case of injury and adding another guy who can rush the passer along with Watt, Highsmith and Cameron Heyward. Wilson could also be the guy to replace Larry Ogunjobi along the defensive line if he leaves after this season.

Wilson was listed as a name to watch at the Senior Bowl by Jonathan Heitritter, and with 17 career sacks and 32 tackles for a loss during his college career, as well as playing in the Big 12 and SEC, he has the pedigree and production the Steelers look for. Wilson is definitely a name to watch come draft season.