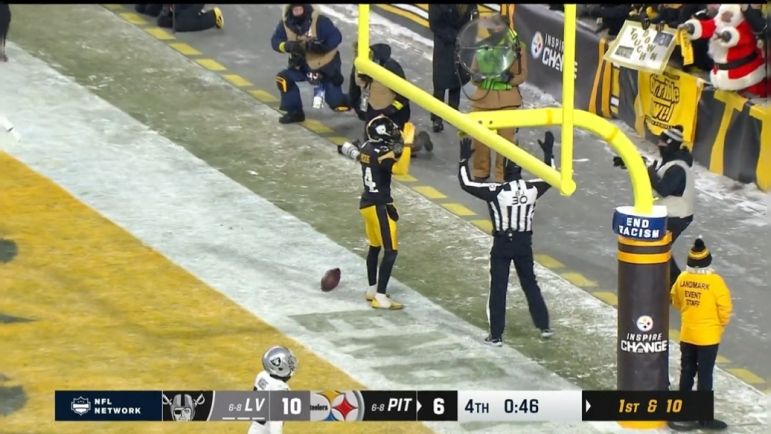 Kenny Pickett to George Pickens. Touchdown. A combination you’re going to hear a lot more of over the next several years. And one heard in the game’s biggest play Saturday night, Pickett firing the game-winning 14-yard touchdown to Pickens with under a minute to go, completing the comeback against the Las Vegas Raiders, 13-10.

Speaking to reporters after the game, Pickett explained what he saw on the play.

“[Pickens] has a middle read route,” Pickett said via the team’s YouTube channel. “George did an incredible job of reading that. The backside safety was hanging over to Pat’s side. I just wanted to hold him long enough with my eyes to make the throw to George down the seam. It worked out really well.”

Here’s a look at the play. The Steelers are 3×1 with Pat Freiermuth as the backside “nub.” Worried about him after making plays in the second half, the Raiders shifted coverage his way, opening up Pickens on the trips side. Pickett fired a strike between two DBs for the score and the win.

Offenses should practice how they play and Pickett says what the team did during the week translated to notch a win and keep Pittsburgh’s season alive.

“Had that look in practice a few times. So it’s great when you work on something, you work real hard at it and it shows up in the game in the biggest moments and you win a game like this.”

Pickens turned in a solid game, finishing with five catches for 57 yards and that touchdown. As we’ve noted, his route tree has expanded since the bye week and Pittsburgh utilized him as more than a deep-ball receiver against the Raiders, though he had a patented 25-yard fade down left sideline. He aligned in the slot, catching a third down slant in the first half and the game-winning touchdown in the second.

The play put Pickett in rare territory, as tweeted by the NFL after the game.

Kenny Pickett's 14-yard TD pass to George Pickens marked only the 4th instance in the Super Bowl era of a rookie QB throwing a game-winning TD to a rookie receiver in the final 2 minutes of regulation.@steelers

For Pickett, he sees growth.

“George is growing as a receiver every week and it’s something that we talked about earlier in the season. Just how he wants to be able to do all these different things and he’s gonna continue to work on his craft. We’re gonna move him around and I’ll find him with the football.”

There’s no question Pickett and the Steelers’ offense was brutal for most of the game. There’s no rewriting history there. Had it not been for an incredible defensive showing against a potent, top-ten Raiders’ offense, Pickett, Pickens, and the rest don’t have the opportunity for a game-winning drive. But as this team has done all year, and for years, honestly, they found a way to make plays when they had to have them. Backs against the wall, the Steelers shine and so their season plays on.