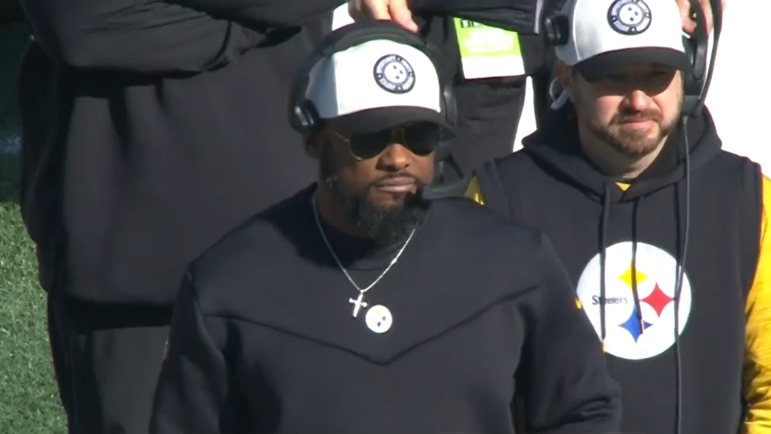 “Pound of flesh” is a popular saying based on entitlement in which someone insists on getting something they are entitled to, even though it may cause distress to the person it is demanded from.

For some members of the media that covers the Pittsburgh Steelers, that may be how they felt or currently feel regarding the disciplinary actions taken against guys like wide receiver Diontae Johnson and safety Marcus Allen following the 24-16 Week 15 win on the road at Bank of America Stadium over the Carolina Panthers.

Steelers head coach Mike Tomlin had no interest in giving members of the media that “pound of flesh” Tuesday during his weekly press conference with the media.

ICYMI #Steelers Mike Tomlin and his reaction to the discipline question ⁦@937theFan⁩ pic.twitter.com/3jZXlEscU5

Johnson, of course, picked up a costly 15-yard unsportsmanlike conduct penalty after his remarkable catch-and-run against the Panthers in the third quarter, forcing three Carolina defenders to miss after the catch, moving the chains in the process. After the catch, Johnson stood over Carolina defensive back Jeremy Chinn and let him know about his feat with the football in his hands, drawing the flag.

That wasn’t the most egregious penalty on the day though. Allen, a special teams ace for the Steelers, inexplicably marched over to the Panthers’ sideline during a TV timeout to talk trash to the Panthers huddle, leading to the 15-yard penalty that took away a punting situation for the Panthers and gave them a new set of downs on a fourth and 27.

Asked twice what was said between Allen, Johnson and himself, Tomlin quickly declined to reveal the nature of those conversations, doing what he’s done for 16 years at the helm of the Steelers: keeping it in-house.

“I’ll leave that in-house,” Tomlin stated to reporters, according to video via the Steelers’ official YouTube page. “I’m not gonna give you the pound of flesh you’re looking for.”

A reporter later tried to followup on the original question, but again Tomlin shut it down with the in-house comment.

According to Allen after the game Sunday, Tomlin gave him an “earful” on the sideline after the penalty, but then largely left it at that and didn’t address it much after the game, other than stating he didn’t know what Allen was doing.

Marcus Allen showed remorse for his unsportsmanlike conduct penalty. "I guess it was just too much passion, going back and forth. I should have started moving closer to my teammates to get away from them."

When it comes to team discipline overall, Tomlin keeps that type of stuff in-house. He’s not one to publicly rip a guy. He never has, never will.

That’s largely why players respect him and want to play for him. It’s the same reason guys loved and respected Bill Cowher. Great coaches handle things inside the locker room and don’t them get out from a discipline standpoint.

At this point in Tomlin’s tenure, he has the leaders in place with the likes of Cameron Heyward, Minkah Fitzpatrick, T.J. Watt and even Diontae Johnson to police the locker room and themselves inside the room.

There is no doubt that discipline was handed down to a guy like Allen for the selfish penalty. But it does no good letting that get outside of the room, especially to appease some media members and the fan base seeking their “pound of flesh.”