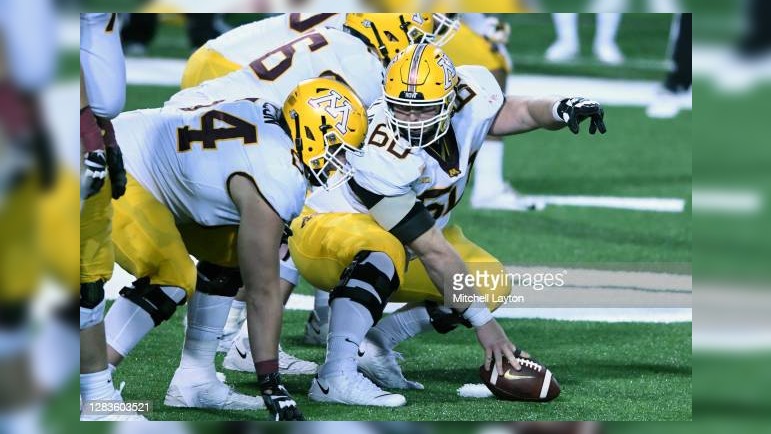 The Golden Gophers and Orange square off in the Bronx, New York at Yankee Stadium for the annual Pinstripe Bowl.

The Gophers have possibly the best center prospect in the draft with C #60 John Michael Schmitz. The 6’4″, 320lb senior possesses the experience, size, strength, and technique to finish blocks at a high level. He is one of the best run blockers in college football, being able to drive his competition off the LOS as well as get out in space. While not a freak athlete, Schmitz can mirror well in pass protection, having a good base and anchor against the pass rush. He can struggle, lunging forward with his blocks on occasion, but Schmitz should likely be a Day 2 lock with a chance to sneak into the back of Round 1.

JMS will be blocking for Gophers’ legend RB #24 Mohamed Ibrahim. Ibrahim has captured plenty of records at Minnesota after playing five seasons in college, having gone over 1,000 yards three separate times. He posted 1,594 yards on 304 carries (5.2 YPC) this season, scoring 19 rushing TDs. Ibrahim is a physical runner between the tackles that can get to the edge as well, having the burst to be a threat in the second level. Still, he lacks top-end speed and hasn’t been much of a pass catcher in his career, relegating him to an early down role at the next level as a likely Day 3 pick.

Minnesota 2023 RB Mohamed Ibrahim has come back from an Achilles tear like few running backs in recent memory.

Here are 12 of his best runs against Northwestern: pic.twitter.com/lgtRo41EIA

OT Matthew Bergeron and RB Sean Tucker have opted out of the bowl game for Syracuse, but LB #3 Mikel Jones intends to play for the Orange Thursday night. Jones is an undersized LB, standing 6’1″, 224lb and may be a hybrid LB/SS type at the next level. However, he has been an impactful defender for Syracuse during his four years and finished 2022 with 82 total stops four sacks, a forced fumble, and a fumble recovery. Jones flies to the football with impressive speed and burst while providing quite the weapon on defense when used on the blitz. He’ll need to prove to be a better coverage defender to warrant getting drafted as a player with a specific skill set for sub packages.

Impressive range/physicality combo for 6'1 225lbs. I don't exactly know where his projected NFL position is yet but I don't see it being at MLB pic.twitter.com/NiiZH7ipnA

The Seminoles of Florida State stay in-state for their post-season showcase against the Sooners of Oklahoma in Orlando, Florida.

The Sooners will be without several draft prospects including Anton Harrison, Andrew Raym, and Eric Gray, who all opted out, but will have WR #17 Marvin Mims in this game. Mims is only a junior but has been touted as a top WR prospect in this draft class if he declares. The 5’11″, 184lb junior lacks ideal size, but makes up for it with his explosiveness and ability to win contested catch situations much like rookie WR Jahan Dotson despite his stature. Having sure hands and great body control, Mims could decide to declare early should he believe his draft stock is high enough to get him selected early this Spring.

For the Seminoles, their top draft prospect hasn’t opted out yet and intends to play Thursday. That would be EDGE #5 Jared Verse who has had a breakout season at Florida State as a transfer from Albany. The redshirt sophomore posted 41 total tackles, 7.5 sacks, and a fumble recovery this season, showing a nice blend of burst and power while boasting a 6’4, 251lb frame. Verse has shown development as a pass rusher, utilizing his hands better while showing bend around the arc. He could opt to go back for another year, but Verse profiles as a top-50 pick who is just scratching the surface of what he can be at the next level.

#FloridaState Edge Jared Verse #5 terrorized the LSU backfield all night. Officially had 2.0 sacks but his impact was greater than that.

The Albany transfer is quickly establishing himself as one of the most disruptive pass rushers in CFB. pic.twitter.com/L1kRBmkZwm

S #10 Jammie Robinson has yet to decide whether to enter the draft or go back to school as well, but right now projects as a middle-round pick, being quite the force as a hard-hitting run defender that has had his flashes in coverage as well, projecting as a potential starter at strong safety at the next level. Fellow S #27 Akeem Dent projects to be a mid-round selection as well, being an athletic defender that lacks ball production and splash plays at the collegiate level but has provided steady play in run defense and in coverage.

FSU S/NB Jammie Robinson will be a riser this fall on Draft boards… 11 starts at FSU last season after coming over from South Carolina.

One of the stronger safety tandems in ACC with Akeem Dent pic.twitter.com/JGPPjgiHT9

WR #14 Johnny Wilson is currently undecided whether he will enter the draft or not, but provides a big body (6’7″, 235lb) that can win down the field or in the red zone in contested catch situations thanks to his huge frame and catch radius. Same goes for RB #8 Treshaun Ward who has operated mostly in a committee this season as an undersized (5’10″, 189lb) yet elusive runner.

The Texas Longhorns make the short trip to San Antonio, Texas to face off against the Washington Huskies in the Alamo Bowl on Thursday night.

The Longhorns have several defensive linemen that are draft eligible to watch in this game including #93 T’Vondre Sweat who profiles as a run-stuffing nose tackle, standing 6’4″, 340lb. DL #99 Keondre Coburn possesses a similar frame and skill set, being a bit stouter at 6’2″, 343lb with a little more pass rush upside than Sweat. DL #98 Moro Ojomo profiles more as a 4-3 base DE given his size and stature (6’3″, 281lb) having had the most productive season as a pass rusher with three sacks. Still, Ojomo is more disruptive than productive and is a bit of a tweener, making him a late-round projection entering the Spring.

Listed at 6'2, 344 pounds; senior Keondre Coburn nearly gets the sack on the twist pic.twitter.com/lzweY7vNbT

Texas also has CB #5 D’Shawn Jamison that is expected to get some interest on Day 3 of the draft. Jamison lacks ideal size and length (5’10″, 187lb), but has plenty of experience, having started the last four seasons. He has shown the ability to cover receivers on the outside with 17 PBUs and seven INTs in his career. His top speed will be called into question during the pre-draft process, and a move inside may help his draft stock as a nickel defender at the next level.

I see you D’Shawn Jamison 👀 pic.twitter.com/7wMt3lIG6B

For the Huskies, OL #51 Jaxson Kirkland is a name to watch. Kirkland was once regarded as one of the top OT prospects in the country but has dealt with several injuries during his time in college, putting his future draft prospects in doubt. Still, the sixth-year senior has played well as a run blocker as well as a pass protector for Michael Penix this season, tipping the scales at 6’7″, 340lb and is battle-tested in the trenches. He is strong at the point of attack in the run game but lacks quick feet and high-end athleticism. Should the medicals check out, Kirkland could be a valuable mid-round draft investment for a team needing OL help.

Alright Jaxson Kirkland (LT #51)… I can get down with that. pic.twitter.com/SstlHsVejq

Washington also has a couple of pass rushers to watch that could be Day 3 selections in EDGE #3 Jeremiah Martin and DE #58 Zion Tupuola-Fetui. Martin is a 6’4″, 261lb senior that currently sits at 8.5 sacks, 11 TFLs and two forced fumbles on the year. Martin has a thick build for an edge rusher but possesses the hand usage to shed blocks and work around the arc of the pocket, making him an intriguing pass rush prospect. Tupuola-Fetui flashed impressive pass rush talent in 2020, racking up seven sacks in three games. However, he suffered a torn Achilles, ending his season abruptly. His production hasn’t gotten back to pre-injury levels, but Tupuola-Fetui still has the athleticism that could get him drafted.