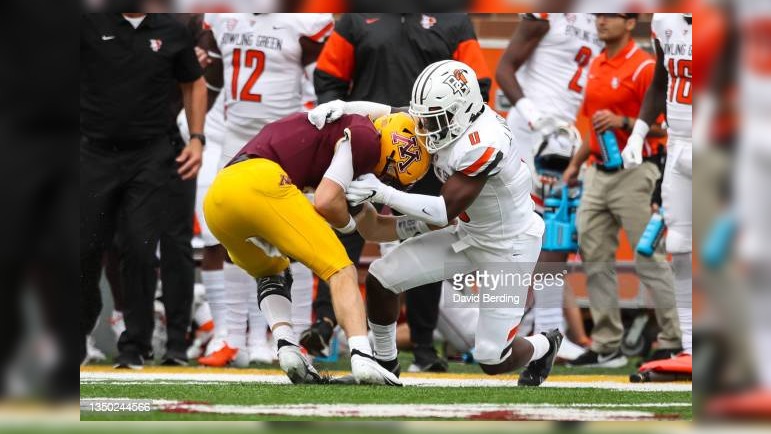 The Falcons and the Aggies square off the day after Christmas in Detroit at Ford Field in the Quick Lane Bowl.

For Bowling Green, the name you need to watch is EDGE #11 Karl Brooks. Brooks is a fascinating prospect, standing 6’4″, 300lb, but has the twitch and movement skills of an edge rusher, being able to beat the tackle around the corner or counter inside as a pass rusher. He posted 10 sacks and two forced fumbles in 2022 and is one of the most disruptive players at the FBS level in college football. His position fit and jump in competition level will be key variables to consider regarding his pro projection, but Brooks should expect to get drafted in the middle rounds as an intriguing edge prospect will some enticing tools.

He’s more fluid, flexible, & explosive than expected. Standing up & using the rush moves in his bag were eye opening.

For New Mexico State, LB #3 Chris Ojoh is a guy that could warrant draft consideration for the Aggies. Ojoh is a tad undersized by NFL standards (6’1″, 220lb), but is an active and productive player at LB. He posted 101 total stops five sacks, a forced fumble, and two PBUs this season. An Eastern Washington transfer, Ojoh has been an effective blitzer, living in the backfield the last two seasons with 26.5 tackles for loss and 11 sacks during that timeframe. Given his size, Ojoh will be asked to improve his average coverage skills and become a special teams ace to make a roster at the next level.

Utilized as nickel, ILB, down lineman.

EDGE #10 Lazarus Williams is another defender to watch for the Aggies after posting 39 total tackles, 7.5 sacks, two forced fumbles and a fumble recovery this season. He has the requisite size (6’5″, 270lb) and athleticism you look for in an edge rusher, albeit posting most of his meaningful production in 2022. Likely a UDFA, Williams could boost his stock into a late-round selection with a strong bowl game performance and a meaningful pre-draft process this spring.