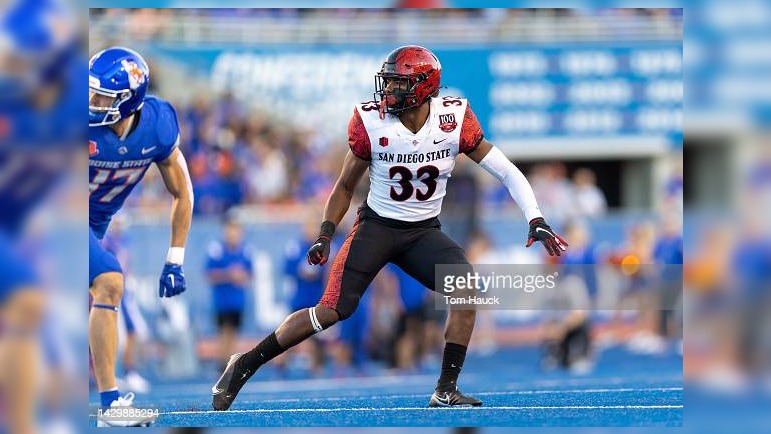 Throughout the 2022-2023 college football bowl season, we’ll be highlighting each game and the key 2022 NFL Draft prospects Pittsburgh Steelers fans should be keeping an eye on.

The Blue Raiders and the Aztecs travel across the Pacific to Honolulu to play the only bowl game scheduled on Christmas Eve.

Middle Tennessee St. has an NFL Draft hopeful in EDGE #9 Jordan Ferguson. The 6’2, 271lb redshirt senior has improved every season on campus from a production standpoint, becoming quite the pass rusher for the Blue Raiders with 17.5 sacks, five forced fumbles, and three fumble recoveries the last two seasons. His frame makes him more of a tweener for NFL standards, and the small-school designation will likely result in him being a late Day Three pick. However, Ferguson has a knack for creating splash plays and also has been a quality special teams player, making him a good selection for a team looking for EDGE depth and a guy that can contribute on punt and kick coverage units right away.

Middle Tennessee's 271-pound DE Jordan Ferguson with a FAKE PUNT and a carry of 49 yards 🔥🔥🔥pic.twitter.com/BEFs14lR83

For the Aztecs, the name to watch is DL #66 Jonah Tavai. Tavai will be a controversial prospect come spring as his size (6’0, 290lb) and lack of length will deter plenty of teams for not meeting their benchmarks. However, Tavai’s tape is fun to watch as the stout defender has great athleticism for his size, lining up all over the LOS and even on the edge at times to rush the passer. He recorded nine sacks this season to complement the 8.5 he had in 2021. Tavai plays with relentless effort as a pass rusher, although size and sheer strength can neutralize his rush and move him against the run. He will have to find a good scheme fit as a Day Three prospect.

18 DAYS UNTIL THE FRISCO BOWL!🏈

Today, we highlight Jonah Tavai's sack during the 4th quarter of the 2021 Frisco Bowl.@AztecFB

Another defender to watch for the Aztecs is S #33 Patrick McMorris. McMorris has good size and length (6’0, 210lb) to go along with ball production over the last two seasons at SDSU. He intercepted one pass this season but had four INTs last year to go along with nine PBUs. McMorris plays with speed and effort in pursuit, closing on the ball quickly to break up a pass or to aid in run support. Projected to be a late-round pick or UDFA at the moment, a strong pre-draft process and good testing numbers could vault McMorris up the board as a player that has plenty of qualities you want in an NFL safety.

San Diego State DB Patrick McMorris does a good job of showing off his range and ball skills! pic.twitter.com/rUNH1xPLIv