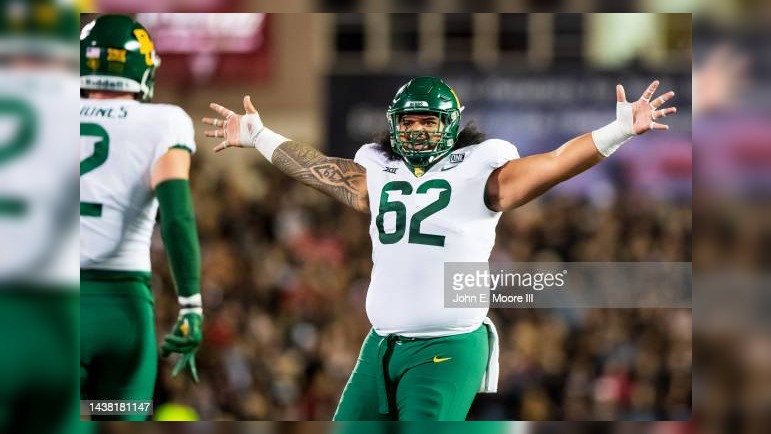 The Baylor Bears get to stay in the state of Texas as they will play Air Force in Fort Worth in the Armed Forces Bowl.

The headliner of this matchup is Baylor DT #62 Siaki Ika. Ika is possibly the best true NT in the upcoming draft class who has yet to declare as a redshirt junior. Ika is a mountain of a man, standing 6’4″, 358lb, and plays like an immovable object against the run thanks to his size and strength to defeats single blocks and occupy gaps to let LBs run free to the football. Still, Ika is surprisingly nimble on his feet for tipping the scales over 350lb, offering some pass rush upside in a package much like Vita Vea of the Buccaneers. Should he declare for the draft, Ika will be one of the first IDL drafted as a plug-and-play nose tackle at the next level.

Siaki Ika is 350+ pounds and can move like this ⬇️ pic.twitter.com/lkMA1O2Q4e

The Bears also have an NFL-caliber OL in OT #76 Connor Galvin. The 6’7, 302lb senior has been starting on the Bears’ OL since 2018 and has the height and length you desire at the position. He could stand to add more mass/strength to his frame, but Galvin has shown that he can get after it in the run game, having the mobility and athleticism to get out in space. Statically one of the best pass protectors in college football and the 2021 Big XII OL of the Year, Galvin should find a home in the league as a quality backup or potential starter.

Baylor LT Connor Galvin showing off why he was the 2021 Big 12 OL of the Year. Phew pic.twitter.com/uUADyMUKSl

The Bears have several other prospects that warrant late-round consideration. C #66 Jacob Gall is an undersized offensive lineman (6’2, 299lb), but is extremely mobile and is a quality run blocker on the move. I personally worked with LB #5 Dillon Doyle when he was at Iowa, transferring to Baylor and has gone on to become a productive player inside (78 total tackles, two INTs) while possessing and NFL-ready frame (6’3, 240lb). He lacks high-end speed and burst but can fill the roll quality run stopper and special teamer at the next level. DL #95 Gabe Hall also could declare as a junior, having the frame (6’6, 296lb) and production (10.5 sacks the last two seasons) that boost defensive linemen up the board.

And just like that Baylor takes it right back! 😅@BUFootball pic.twitter.com/Ylta7MRhYc

For Air Force, RB #20 Brad Roberts is the name to watch. He has good size (5’11, 215lb) and athleticism as a runner in Air Force’s rushing attack, finishing third in the FBS with 1,612 rushing yards on 308 carries (5.2 YPC) and 15 TDs. Roberts was near the top of college football in production last year as well, posting 1,356 yards and 13 scores in 2021. He only caught one passing 2022, making him an early-down runner. While a likely late round pick or UDFA, Roberts has a chance to get into a training camp and make a roster as a team’s RB3 while contributing on special teams.

Brad Roberts had a night for @AF_Football with 3⃣ TDs! pic.twitter.com/D2X0x5KZoR