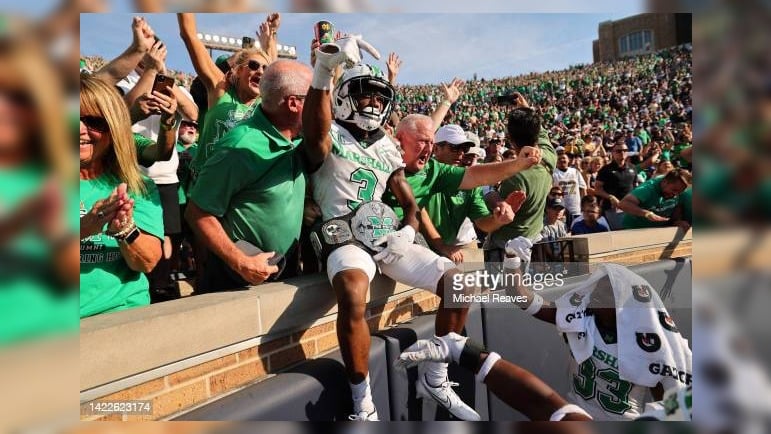 The Marshall Thundering Herd faces off against UCONN Monday afternoon in South Carolina. Marshall has a cornerback with a familiar name to keep an eye on in this game, CB #3 Steven Gilmore. The younger brother of former DPOY Stephon Gilmore, Steven has established himself as quite the ballhawk himself during his time with the Thundering Herd, snagging nine INTs while picking up a whopping 31 PBUs across five seasons. He’s extremely competitive at the catch point, but that leads to him picking up PI calls more often than you’d like to see. Fairly thin framed, (6’0″, 170lb), Gilmore will have to show scouts that his lack of ideal size won’t hold him back when he competes with NFL-caliber receivers at the next level.

MARSHALL IS GONNA DO IT

STEVEN GILMORE the BROTHER of STEPHON GILMORE WITH A PICK SIX 👀👀👀👀 pic.twitter.com/prDAwx0yqo

Marshall has a couple of other draftable prospects to watch in this game. OG #54 Cedrice Paillant and LB #7 Abraham Beauplan.  Paillant transferred from Rutgers to Marshall this season and put together a respectable 2022 campaign. Standing at 6’4″, 320lb, he has good size and strength to generate a push in the run game and has the tools to be a capable pass protector. Beauplan is a downhill run stuffer, playing fast and physical as he flies through gaps to make plays. His work in coverage and testing numbers will determine whether he gets drafted or is an UDFA candidate after the draft.

For the Huskies, they have their own tackling machine attracting the attention of scouts in LB #8 Jackson Mitchell. Mitchell is a fringe late-round pick at this point in the process and lacks ideal weight to fill out his frame (6’2″, 229lb), However, Mitchell makes plays all over the field for UCONN, logging 133 total stops, 4.5 sacks, two forced fumbles, five fumble recoveries, three PBUs, and an INT. Mitchell has great instincts paired with impressive pursuit, helping him be around the ball on a regular basis. He will have to cut his teeth on special teams but could become a solid depth/rotational linebacker.

Another name to watch for UCONN is OG #64 Christian Haynes. Haynes has good size and a sturdy frame (6’3″, 305lb) that excels in run blocking, having the movement skills to work out in space and climb to the second level. More of a late-round/UDFA prospect, Haynes will have to continue to improve in pass protection and add strength to better hold his own against powerful interior defensive linemen in the league.

197 – G Christian Haynes (UCONN)
Yeah a 4th OL because their OL is really bad and they need youth. Hes athletic with a mean streak at this point in the draft i'll take the chance that he develops (RG below) pic.twitter.com/1rUuev8iTa